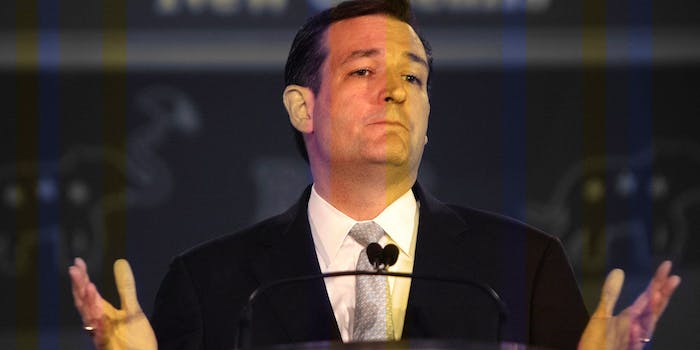 The latest dirt being flung at presidential candidate Hillary Clinton comes by way of GOP rival Sen. Ted Cruz (R-Texas), who suggested at an Iowa campaign stump on Friday that Clinton should receive a spanking.

Now, the Internet is trying to give Cruz a walloping of his own.

Over the course of her political career, Clinton has been a consistent target of gendered mockery and misogynistic remarks. From pantsuits to spankings, from “aging” to “shrill,” to being photoshopped out of the famous Situation Room photograph taken during the raid on Osama Bin Laden‘s compound, Clinton has rappelled through the obstacle course America reserves for women who dare to think they can be the boss.

The dismissiveness continued on Friday, when Cruz, speaking to supporters in a Charles City coffee shop on Friday, compared Clinton to his five-year-old daughter.

“In my house, if my daughter, Catherine, the five-year-old, says something that she knows to be false, she gets a spanking,” said Cruz, referring to the Benghazi scandal that continues to trail Clinton.

“Well, in America,” Cruz continued, “The voters have a way of administering a spanking.”

Cruz’s comments enraged many who are tired of watching the former first lady, senator, and secretary of state get bashed year after year.

On Monday night, the grassroots campaign CREDO Action launched a petition asking that Cruz receive his own kind of spanking. The petition, which quickly garnered more than 28,000 signatures in about 12 hours, asks Senate Majority Leader Mitch McConnell to censure Cruz.

No matter the political or policy disagreements Sen. Cruz may have with Hillary Clinton, there is no place for that kind of offensive, misogynistic, violent rhetoric in our public discourse. If Republican leaders in Washington are serious about casting off their image as a party waging a war on women, then they need to quickly and publicly rebuke Sen. Ted Cruz for his comments.

McConnell is unlikely to rebuke Cruz, given his own track record. As the petitioners pointed out, McConnell himself voted against renewing the Violence Against Women Act (VAWA), joining a minority of 22 male senators who opposed the fundamental law before it was renewed in 2013.

Neither the office of Cruz nor McConnell responded to our request for comment.

Cruz’s spanking remarks have been roundly criticized in the media—even the ultra-conservative Daily Caller called the spanking threats “discordant.”