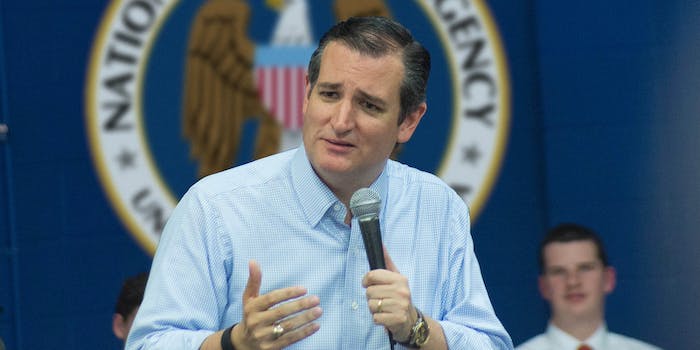 Cruz's stance on NSA surveillance sets him apart from several of his fellow candidates.

Texas Sen. Ted Cruz on Thursday offered an impassioned defense of his vote to rein in the government’s bulk phone surveillance, blasting those in his party who he said wanted to “exploit the current crisis by calling on Americans to surrender our constitutional liberties as the only way to ensure our safety.”

The Republican presidential candidate, who has been gaining in recent early-state primary polling, used a speech at the conservative Heritage Foundation to respond to criticism from two fellow candidates, Florida Sen. Marco Rubio and New Jersey Gov. Chris Christie, for his vote to end the National Security Agency’s mass collection of phone records.

Under the USA Freedom Act, a law that took effect on Nov. 29, the NSA must get a warrant and then ask the phone companies for call metadata—information about calls, but not call audio—instead of collecting it itself. Rubio and Christie have attacked Cruz over his vote for the bill, attempting to cast him as a civil-liberties dove at a time when Republican voters want ever more hawkish responses to terrorist attacks.

“Like the fable of the scorpion and the frog, government will do what is in its nature—amass power at the expense of the people.”

“Like the fable of the scorpion and the frog,” he added, “government will do what is in its nature—amass power at the expense of the people.”

Defending his vote for the USA Freedom Act, which passed the Senate 67-32, Cruz cited Director of National Intelligence James Clapper‘s testimony to Congress in support of the bill, which Clapper said would improve, not weaken, the American intelligence community that he leads.

“Under the USA Freedom Act, investigators have more tools to target suspected terrorists, to access their phone records, to track down those with whom they’ve communicated,” Cruz said. “Under the old bulk-data program, all of us were presumed guilty at the outset.”

In a shot at Rubio and Sen. Tom Cotton (R-Ark.), whose bill to revive the NSA program Rubio co-sponsored, Cruz said his opponents in the surveillance debate were interested in “sweeping aside citizens’ Fourth Amendment rights.”

Speaking to a conservative audience in the middle of a heated Republican primary season, Cruz emphasized that he sympathized with the desire to collect useful information and protect the American people. But like many NSA critics on the left, he slammed surveillance hawks’ focus on quantity over quality, urging a rethinking of how the U.S. spies on its own people.

“It is often not a lack of intelligence but a lack of perception” that stymies investigations, he said, echoing the findings of a congressional investigation into the Sept. 11, 2001, terrorist attacks that blamed intelligence-sharing failures at federal agencies.

“We should not shy away,” Cruz said, “from smarter policies that enhance our ability to target the bad guys while protecting the rights of law-abiding citizens.”