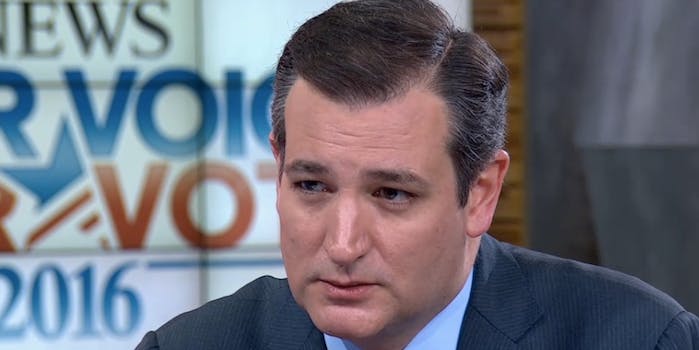 “Contrast the people who are standing with me—Carly Fiorina, Indiana’s governor, Mike Pence,” Cruz said in an interview taped for Sunday’s Face the Nation. “On the other side Donald Trump was proudly trumpeting the support of Mike Tyson, a convicted rapist who served three years in prison here in Indiana for rape.”

Cruz campaign is attacking Trump for being endorsed by Mike Tyson, who starred in Hangover 2 which was written by Cruz's freshman roommate.

In early March, Tyson told the New York Post that he empathized with Trump. “Now he knows what it’s like when everybody is out to get you,” said the former heavyweight champion, who was convicted of raping 18-year-old Desiree Washington in July 1991.

“He’s probably never known that to this extent,” Tyson said, referring to criticism of Trump. “All those people he sat down with and gave him [things], now those people are saying, ‘We’ve got to get rid of him at all costs.'”

Cruz told CBS host John Dickerson on Sunday: “Donald Trump says, ‘Well, Tyson is a tough guy.’ You know what, John? I don’t think rapists are tough guys. I think rapists are weak, they’re bullies and they’re cowards. And Donald may be really proud of his support from a convicted rapists. I’m proud of the support of Carly Fiorina and Mike Pence.”

Making the rounds, Cruz later appeared on MSNBC’s Meet the Press, among many other similar programs. The Texas senator once again advertised the support of Fiorina, who joins the Cruz campaign as his running mate. Despite a series of recent primary disasters, the candidate maintains that support for his campaign is “surging.”

Cruz still refuses to explicitly state that he’d support Trump as the GOP nominee, reportedly dodging the question a grand total of nine times during his tour of political talk shows on Sunday morning. He further criticized Trump for an “economic agenda” that would “impose massive taxes on the American people” and “send us into a recession.”

Asked about former House Speaker John Boehner, who recently referred to Cruz as “Lucifer in the flesh,” Cruz said that Boehner was the most “miserable son of a bitch” he’d ever worked with, turning the retired speaker’s barb back around. Ouch.