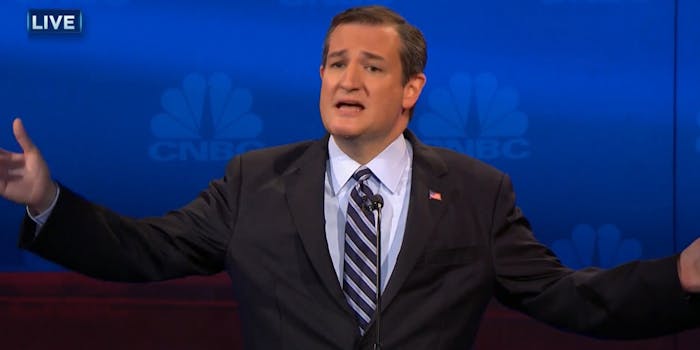 He scored on every metric.

Ted Cruz may not be dominating the polls, but he definitely had one of the biggest moments of the third 2016 Republican presidential debate.

The Texas senator went on the attack—not against his fellow candidates, but against the media and the CNBC debate moderators, whom Cruz lambasted for focusing on spats and personality rather than “the substantiative issues people care about.”

“The questions that have been asked so far in this debate illustrate why the American people don’t trust the media,” Cruz said. “This is not a cage match.”

“You look at the questions,” Cruz added, “Donald Trump, are you a comic book villan? Ben Carson, can you do math? John Kaisch, can you insult those two people over here? Marco Rubio, will you resign? Jeb Bush, why have your numbers fallen? How about talking about the substantive issues people care about?”

Cruz’s jabs at the media drew some of the most significant responses from viewers ever, according to famed conservative pollster Frank Luntz, who conducts real-time focus groups during political debates.

That's the highest score we've ever measured. EVER. #GOPDebate

The pro-Cruz/anti-media sentiment continued online, where Cruz dominated the Twitter conversation, according to Spredfast, a social-media software maker.

Analysis by @spredfast shows that Ted Cruz is crushing everyone, even Trump, in social media mentions. #GOPDebate pic.twitter.com/kLvr4pgYqn

Offline, Cruz has struggled to push his way into the limelight, which has been occupied by Trump and, more recently, Carson, a former neurosurgeon. According to the Real Clear Politics poll averages, Cruz rounds out the top five candidates, with an average support of 6.6 percent, roughly 20 points behind frontrunner Trump.