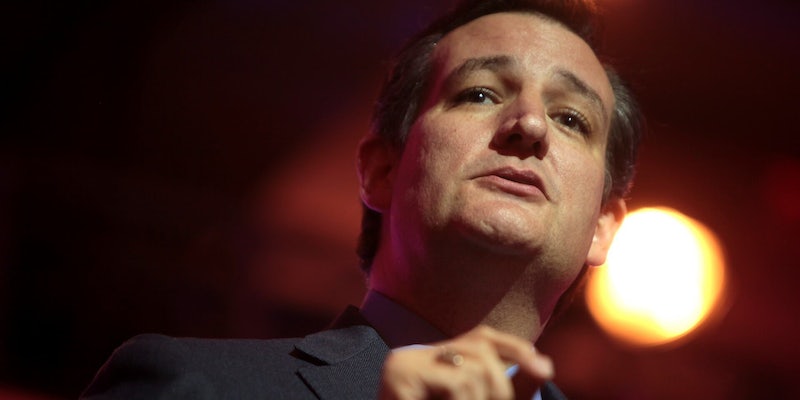 'Ted Cruz is a good reminder that getting an Ivy League education doesn't mean you're actually smart.'

It all began after news publication The Rebel posted an online clip of O’Rourke at CNN’s seven-hour town hall—in which the current 2020 Democrats spoke on their policies regarding climate change. When it came time for O’Rourke to speak, he gave an anecdote about his son questioning if their city of El Paso, Texas, could still be sustainable to human life, despite rising temperature and climate change.

“When I was talking to him the other night, he asked me, ‘dad if you win and you become president we get to live in El Paso, right.’ And I said no, ‘if we win … we would live in Washington D.C.,” O’Rourke shared. “But he knew because I had told him about the warming that we face, that our community will be uninhabitable–will not sustain human life along this current trajectory unless something dramatically and fundamentally changes.”

Beto O'Rourke says his 8 year old son told him that they cannot live in El Paso in the near future because it "would not sustain human life unless something dramatic changes" with climate change.

For some reason, Cruz responded to the clip of O’Rourke with the caption: “Um, El Paso is land-locked.”

And what followed was a lot of confusion, but also a lot of jokes.

Clearly, O’Rourke was talking about the three-digit temperatures El Paso has been having lately, referring to the fact that the blistering heat in his city could make it uninhabitable.

However, it seems Cruz was thinking about rising sea levels and potential flooding to the area. Hence, why he pointed out that El Paso was landlocked. He failed to realize that flooding and rising sea levels are not the only dangers climate changes pose.

“You know “uninhabitable” can mean things besides “under water,” yes? Similar to if someone said Trump “humiliated you,” it doesn’t necessarily mean they’re talking about how he lied about your dad. They could also be talking about how he called your wife ugly. For instance,” said @JoePort.

Um…he said nothing about water.
But, that wouldn’t fit your antagonistic agenda, now, would it?!?

“I also hear there are parts of Texas where you can fry an egg [on the] sidewalk in summer. Imagine what it will be like once Climate Change comes with its unrelenting oppression,” said actress Patricia Arquette.

I also hear there are parts of Texas where you can fry an egg not he sidewalk in summer. Imagine what it will be like once Climate Change comes with its unrelenting oppression.

Cruz has not responded to the backlash. But that’s because by now he’s probably used to it.