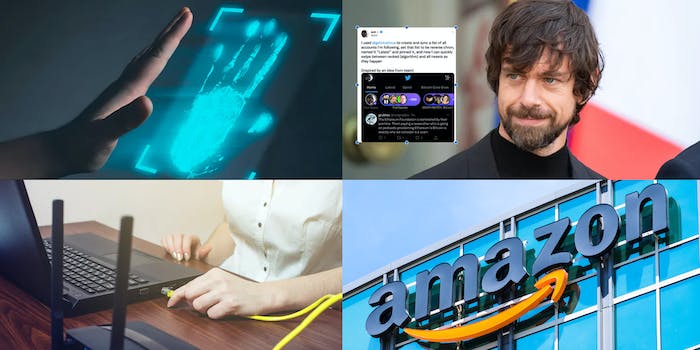 A group of senators is asking Amazon about how the company plans to use—and secure—data it collects from the palm print payment system that it uses in some of its stores.

Amazon One is a device that uses a palm print scanner to allow people to pay for things at its stores instead of using a credit card. The company says the palm print scanner is being used at Whole Foods and other stores throughout the country.

In their letter, the senators raise concerns about the company’s future plans to use the biometric reading technology and how the retail giant is storing that data.

Summertime is almost over, but it’s not too late for a glow up. And Sakara’s Metabolism Super Powder not only helps beat bloat, but it keeps those constant sugar cravings at bay while keeping you satiated for longer. Simply add a scoop to your morning coffee or smoothie, and get an energy boost without the midday crash. Power up your metabolism and feel your best, with Sakara. Use code DAILYDOT20 for 20% off.

All most users want is a return to a simpler time, when tweets appeared chronologically and antisemitism didn’t dominate the platform.

Well, Twitter’s CEO Jack Dorsey appears to have addressed one of those complaints (no, not the Nazi one), in an extremely convoluted way.

“I used @getvicarious to create and sync a list of all accounts I’m following, set that list to be reverse chron, named it ‘Latest’ and pinned it, and now I can quickly swipe between ranked (algorithm) and all tweets as they happen (inspired by an idea from team),” Dorsey wrote the other day.

Dorsey himself, as CEO, has the power to return his and yours and everyone’s timeline to its “latest” glory, instead of its algorithmically weighted current iteration, which displays posts in erratic fashions that people struggle to comprehend.

After he posted it, Twitter users were stupified by the lengths he’d go to return his personal timeline to its prior state or convinced it was a perfectly executed troll job.

The infrastructure bill includes $65 billion allocated for broadband that will go to deployment and affordability issues. The bill sets aside $14.2 billion of the total broadband money to extend the FCC’s “Emergency Broadband Benefit” (EBB).

The legislation would rename the EBB to the “Affordable Connectivity Program,” and would see some changes to the current EBB program.

The EBB, which was launched in response to the coronavirus pandemic, lets eligible Americans get a discount on their monthly internet bills to help them pay for service. The EBB offers $50 discounts per household, or $75 on Tribal lands

The massive infrastructure package, which still needs to pass through the House before heading to Biden’s desk for a signature, would lower that monthly discount to $30.

The program, which millions of people have signed up for since it launched in May, was scheduled to end shortly after the government marked an end to the pandemic or the $3.2 billion Congress allocated for it last year ran out.