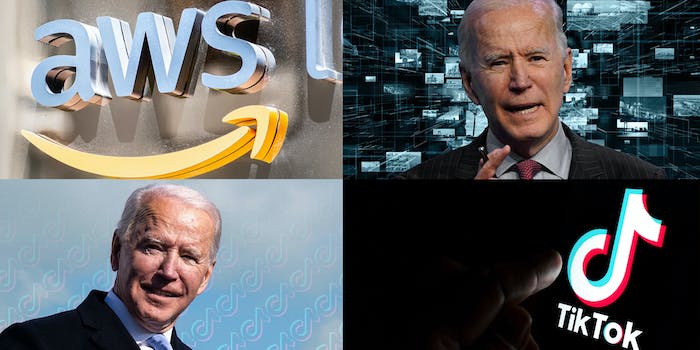 A Texas man who traveled to the Capitol for the Jan. 6 riot attempted to obtain explosives in order to bomb Amazon data centers, the U.S. Justice Department (DOJ) has revealed.

Seth Aaron Pendley, a 28-year-old native of Wichita Falls, pled guilty over a plot to bring down “about 70% of the internet” by bombing data centers throughout Virginia.

Pendley was arrested in April after attempting to buy fake C4 explosives from an undercover FBI employee. A DOJ press release states that the FBI learned of Pendley after being contacted by a “concerned citizen.”

As part of a plea deal, Pendley admitted to telling a confidential human source in January about his intentions over the encrypted messaging app Signal. Pendley then shared a list of addresses for data centers the following month as well as a hand-drawn map of a specific data center on Smith Switch Road in Virginia.

After the source offered to introduce him to an explosives dealer in order to aid his plot, Pendley responded enthusiastically: “Fuck yeah.” Only the explosives supplier, who recorded their conversations with Pendley, was working for the FBI.

Pendley reportedly admitted in the recorded conversations that his aim was to bring down servers he believed were being used by federal agencies such as the FBI and CIA. By bombing the data center, Pendley hoped to anger “the oligarchy” and spur the American populous to rise up against the current “dictatorship.”

It was during those conversations that Pendley also allegedly admitted to having a sawed-off AR rifle in his car while visiting the nation’s capital on Jan. 6, although he denied actually entering the U.S. Capitol.

Did you know know Starz is one of the biggest secrets in streaming? Here’s everything new coming to the service this month with a free trial to boot.

Starz might be the best streaming service no one talks about. While HBO gets all the shine, Starz is breaking new ground with its thoughtful, thrilling, and addictive original series. This month they debut their latest show based off the hit indie film Blindspotting along with a host of Pride related content. No one else in the premium cable/streaming space is making the kind of shows Starz is. Learn more and get a free trial in our What’s New on Starz article.

Biden cut funding for his broadband push—will it be enough to close the digital divide?

When President Joe Biden unveiled the American Jobs Plan, one of the standout elements was his proposal to invest $100 billion into expanding broadband access across the country—or at least it was. The Biden administration decided last month to lower its proposed investment down to $65 billion.

According to the Washington Post, talks on the infrastructure package broke down last week. While the White House is still working to pass it, given the recalcitrance of Republicans on the pricey proposal, it’s practically guaranteed that in whatever deal is struck, the money for broadband access, for closing the digital divide, won’t be going up.

“Our expectation is about $150 billion,” Johnny Park, CEO of Wabash Heartland Innovation Network, said at a recent congressional hearing. Biden’s plan is now less than half that. A different study from Tuft University predicted that $240 billion would be required to fill in the gap.

Regardless of the estimated cost, there’s a sense that current estimates provided by the administration are not enough to fill the gap.

“It’s best to not get hung up on a magic number that will solve the digital divide,” Dana Floberg, a policy manager at Free Press, said. “Suffice to say that we know it’s an expensive problem, and $100 billion certainly sounds better than $65 billion.”

In a statement, the White House announced that Biden has instead replaced the directive with an order to conduct an “evidence-based” analysis of apps produced by foreign adversaries.

The analysis aims to determine whether such apps, including those developed by China, pose an “undue or unacceptable risk” to U.S. national security.

Trump had attempted last year to bar TikTok from app stores in an effort to keep it from being downloaded by new users in the U.S. The ban never went into effect after facing significant legal pushback.

The former president and others raised concerns over TikTok’s parent company ByteDance and whether the Chinese government could force the app maker to hand over data on U.S. users. TikTok has repeatedly denied such a possibility, arguing that the data of U.S. users does not leave the country.

Biden’s order also outlines specific scenarios, such as if an app is utilized in support of a foreign military or intelligence service, in order to determine whether an app should be deemed as presenting an unacceptable risk.