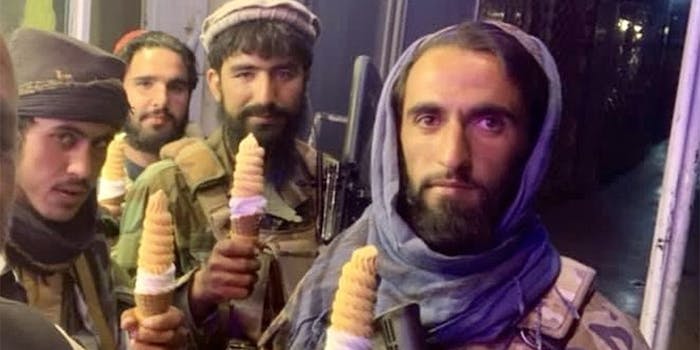 Was the Taliban trolling Joe Biden with an ice cream pic?

If there’s one thing President Joe Biden loves, it’s chomping down on some ice cream. Pictures of him enjoying a cone constantly go viral, it’s become a comparison meme, and he once managed to deflect a question about the Jan. 6 Capitol riot but saying he was just trying to get some ice cream.

While it’s a well-known trope among the media class and the extremely online, has news of Biden’s love of ice cream made it all the way around the world? Like to Afghanistan?

This week, photos of the Taliban enjoying the creature comforts of life went viral after it toppled Kabul and took control of the country.

One such picture showed them eating ice cream.

Eating ice cream. It’s a thing you like to do. It’s a thing that might taste nice on a hot August day after the culmination of a 20-year war against a superpower. But could it have been a secret message to Biden?

That was a response to the photo online, where a number of right-wingers dubbed it clear shade directed at the U.S. president.

ZeroHedge, a conservative news site, declared “The Taliban sent Joe Biden a message Tuesday by posing for a photograph, which later end up on Twitter, showing fighters holding ice cream cones. The message is clear. They know Biden is a weak, mentally disabled joke of a man, and they have zero fear of America under his leadership.”

It’s unclear how that’s a motivated troll by them if they weren’t the ones posting it, but alas, others agreed. According to conspiracy theorist Paul Joseph Watson, it was a clear “message.”

But for a trolling effort to be successful, it needs to have some semblance of a message or thrust. What that might be here, well, no one has explained it. We now have ice cream too? We will take a hands-off approach to America like you did to Afghanistan? If there’s a message there, it’s pretty obtuse.