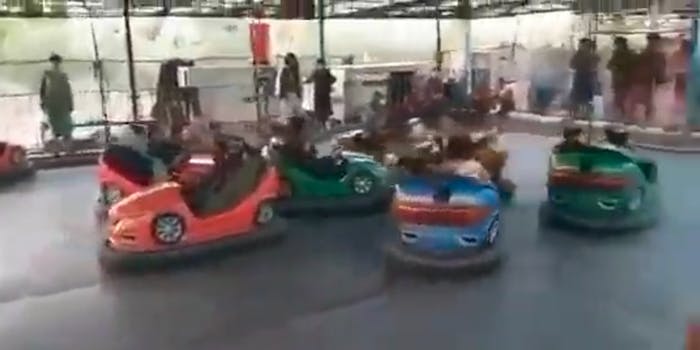 The militant group took over an amusement park in Kabul.

Bizarre footage out of Afghanistan appears to show members of the Taliban using bumper cars and a merry-go-round after taking over the country.

In footage posted to Twitter, armed members of the extremist group can be seen enjoying themselves on numerous rides at an amusement park in Kabul.

The videos were released after the militant group swept across the country and overtook Afghanistan’s capital. Thousands of Afghans and U.S. citizens have since descended upon the airport in Kabul in the hopes of escaping the country.

The footage is just the latest in a growing line of surreal videos, including those that show Taliban fighters attempting to use gym equipment in the now-abandoned presidential palace. Afghan President Ashraf Ghani fled the country shortly after the U.S. began pulling troops out of the region.

The deteriorating situation in Afghanistan has led to widespread criticism of President Joe Biden and the apparent failure of his administration to safely withdraw U.S. citizens as well as Afghans who have aided the U.S. over the past two decades.

Former presidents George W. Bush, Barack Obama, and Donald Trump have received backlash over the past several days for their involvement in American’s longest war as well.

The footage of the Taliban coincides with other videos from Kabul that are much more harrowing. Afghans were also filmed clinging to airplanes as they departed the airport before some eventually fell to their deaths.