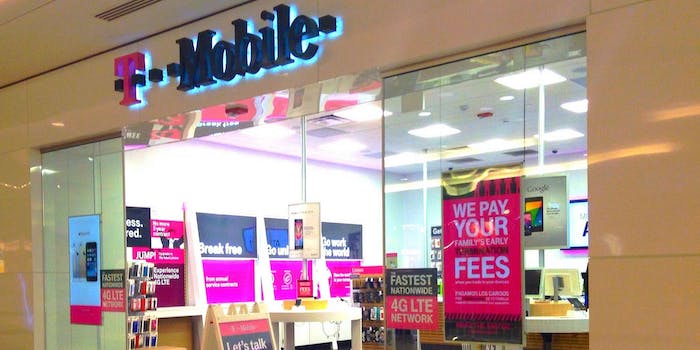 T-Mobile will soon offer unlimited video streaming for Netflix, Hulu, and others

Everything has a cost.

Update 2:00pm CT, Nov. 10: At T-Mobile’s Uncarrier event today, CEO John Legere confirmed the company’s plans to offer a plan that does not count streaming video services against a customer’s data cap. The feature, called Binge On, will be added automatically for all T-Mobile customers with 3GB data plans or higher, for no additional cost. Our initial report of this upcoming change follows.

If you’re a T-Mobile subscriber, it appears you may soon be able to Netflix and chill no matter where you are.

On November 10, the third-largest carrier in the United States is reportedly set to host the tenth in its series of Uncarrier events, during which it’s said the Bellevue, Wa.-based company will announce unlimited video streaming that won’t cut into monthly data plans.

The report comes from Evan Blass, otherwise known by his Twitter handle @evleaks. Blass has proven to be a reliable source of information in the past, managing to leak information on major devices well ahead of their official announced existence.

T-Mobile hasn’t confirmed any of the rumors surrounding its event. When asked for comment on the speculation, T-Mobile’s Senior Vice President of Corporate Communications Janice Kapner told the Daily Dot, “There are always rumors ahead of our Un-carrier events and it’s part of the fun—we love it!”

The plan would fall in line with the carrier’s existing approach to data. The carrier already offers what it calls “Music Freedom,” which enables users to listen to music from services like Pandora, Spotify, and Google Music. When subscribers stream from one of the approved apps, the data used doesn’t count against their data plan.

Including video into data-exempt category would be a huge benefit to T-Mobile customers—and a major temptation to any traveler or frequent streamer looking to change carriers. Video eats up a considerable amount of data; an HD Netflix stream eats up 3GB per hour while even a lower quality stream takes about 300MB per hour. That adds up quick.

There’s an old saying that applies to T-Mobile’s plan, though: There is no such thing as a free lunch. T-Mobile’s plan would present no cost to its customers, but it comes at a serious cost to net neutrality activists.

Both T-Mobile’s Music Freedom and the proposed video version are examples of zero rating, a practice used by mobile network and Internet service providers to not charge for data used by specific applications.

The fear, according to proponents of net neutrality, is that zero rating is the equivalent of picking winners and losers. An upstart company offering a similar service to Netflix or Spotify would have a hard time gaining traction on T-Mobile because it would cost data to use services that haven’t been exempt status on the network.

Public Knowledge Senior Staff Attorney John Bergmayer told the Daily Dot, “Zero-rating has some pretty major competitive implications and could tilt the playing field in favor of the services lucky enough to get special treatment.  Just as net neutrality violations can happen through technical means, they can happen though billing practices.”

Bergmayer noted that T-Mobile hasn’t formally announced anything yet, but Public Knowledge has expressed concern regarding the company’s Music Freedom service in the past, suggesting that it undermines the principles of net neutrality. A similar plan for video streaming services would generate similar worries.

Andrew Clement, Professor Emeritus in the Faculty of Information at the University of Toronto, told the Daily Dot the T-Mobile plan is “part of a wider disturbing trend within the telecom industry,” in which companies attempt to leverage control of the distribution networks to move into potentially more lucrative content markets.

“The obvious risk here is the potential for the extension of the current oligopolistic control by major telecom providers and is a direct threat to principles of net neutrality. If this becomes established, we’ll see the internet become even more like the broadcasting industry, dominated by a few large players, while less powerful actors and voices will find increasing barriers to be heard,” he warned. “And consumers will find it harder and more expensive to access services that have not made deals with the major telecoms.  It is a bad move that should be resisted.”

The position presents an uphill fight for net neutrality believers, who have to hope people will pick their principles over their pocketbooks. Judging from some of the reaction online, that seems unlikely.

This is huge! Please let @YouTube be part of unlimited video streaming by @TMobile!! https://t.co/AX6cPnp4Ty

Many have been skeptical of the report, noting that it would present major challenges for the company’s network infrastructure to handle and would cause considerable congestion.

We won’t know until November 10 if T-Mobile makes the rumors reality, but the potential implications of such a decision already weigh heavy on both the network provider and its customers.