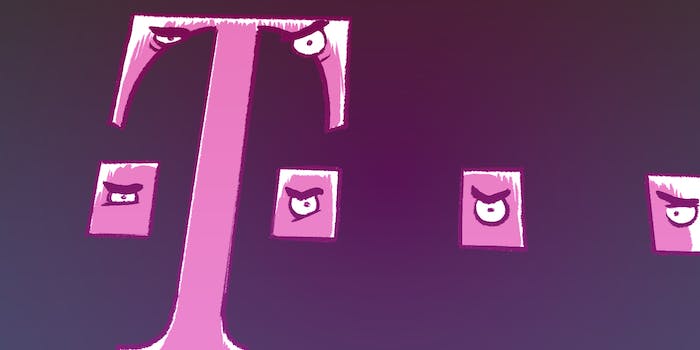 T-Mobile's CEO has already weighed in.

T-Mobile is giving its customers a seemingly generous video-streaming perk, but the new program might run afoul of open-Internet rules.

Binge On, which the nation’s third-largest wireless carrier announced Tuesday, lets customers stream video from Netflix, Hulu, HBO Now, ESPN, and other services without that streaming eating up their mobile data allowance.

While T-Mobile customers will likely jump at the chance to watch as many Netflix movies as they want without hitting their data cap, Binge On could attract the attention of the Federal Communications Commission, because the program might violate net neutrality.

In February, the FCC adopted rules prohibiting Internet service providers from prioritizing, blocking, or slowing down access to certain services. If Comcast could slow down Internet traffic to all the major streaming services that it didn’t own, the thinking went, that might encourage Comcast customers to try the company’s own service, which would be comparatively faster.

The principle at work here is that any ISP action to make one service more appealing than another is unfair to the other services. T-Mobile’s new practice of exempting services from metered data usage—called “zero rating” because the carrier “rates” the amount of data used as zero for billing purposes—could fit that description, because it incentivizes T-Mobile customers to use those services.

If the FCC determined that this instance of zero rating amounted to illegal prioritization, it could open an enforcement action against T-Mobile.

Multiple FCC spokespeople did not respond to requests for comment on T-Mobile’s new streaming offering. But the agency has said in the past that it evaluates such programs based on a “no-unreasonable interference/disadvantage standard.” It does not define “unreasonable interference” in the 2015 Open Internet Order that established net neutrality.

T-Mobile did not respond to multiple requests for comment. However, John Legere, T-Mobile’s bombastic CEO, dismissed the notion that Binge On violated net neutrality.

“This is not a net neutrality problem,” he said at the event on Tuesday where he unveiled the program. “This is similar to Music Freedom [a similar program for music streaming]. It’s free!”

But open-Internet groups have criticized T-Mobile for Music Freedom and now appear poised to do so for Binge On as well.

“T-Mobile should consider ways to offer customers more value in ways that do not have the competitive implications of its zero-rating efforts to date, including today’s ‘Binge On’ announcement,” John Bergmayer, a senior staff attorney at Public Knowledge, said in a statement. “Turning the mobile Internet into a carrier-controlled walled garden is ultimately a bad idea for consumers, for all online services (even those included in T-Mobile’s zero-rating today), and for the wireless industry as a whole.”

Matt Wood, policy director at Free Press, echoed Bergmayer’s concern that Binge On may discriminate against some video producers and customers.

“People will rightly ask whether this practice discriminates unreasonably against video providers that don’t make the cut or can’t take advantage of this exemption for some reason,” Wood said in a statement. “But the real question is why T-Mobile would discriminate in favor of its customers who watch a lot of video, and against those who don’t—especially when we’ve heard excuses so many times about the supposed strain that video puts on networks.”

ISPs and their trade groups are challenging the FCC’s net-neutrality rules in court. A three-judge panel of the U.S. Court of Appeals for the D.C. Circuit will hear the case in December.