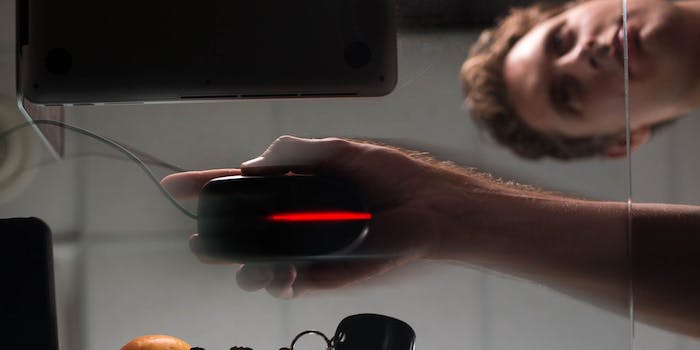 Anyone who’s ever owned a computer has, at some point or another, been frustrated with it. Whether it’s the blue screen of death or the dreaded pinwheel, we’ve all perhaps mashed the keyboard, slammed our mouse down on its pad, or clicked aggressively on our track pad hoping to magically fix our problem.

Now research suggests that you’re showing your anger in a more subtle way: changing the way you actually move your cursor. And Web designers may be able to use this data to determine if Web pages are not user friendly.

In a study published in Management Information Systems Quarterly, researchers monitored people’s cursor movements to determine if they changed when people were frustrated, and if they could use those movements alone to predict a user’s emotional state.

The researchers had to first reliably piss people off in order for their experiments to work. So they created everyday computer frustrations like making a page take forever to load, only to eventually fail. They also had participants try to answer timed questions, but designed the questions to be too complicated to answer in a short amount of time. When time was up, the page advanced automatically.

They found that instead of moving the cursor in a nice, smooth arc, frustrated people moved the mouse in more sporadic, jagged motions. Others moved the mouse more slowly.

In their report, the researchers said that they think the behavior can be explained by the attentional control theory (ACT), which posits that people experiencing negative emotions shift from acting in a goal-driven manner to a stimulus-responsive manner. Basically, you go from focusing on what you want to the thing that’s upsetting you.

A happy Internet user will move his or her mouse in a direct, precise manner to achieve a particular goal. A frustrated Internet user will be too distracted by whatever’s getting on their nerves to browse in an easy way, the study suggests.

“Using this technology, websites will no longer be dumb,” study author Jeff Jenkins said in a press release. “Websites can go beyond just presenting information, but they can sense you. They can understand not just what you’re providing, but what you’re feeling.”

Hopefully the technology will be used for good, and not for evil things like an Orwellian dystopian future where our every emotional whim is monitored by the government, or advertisers.