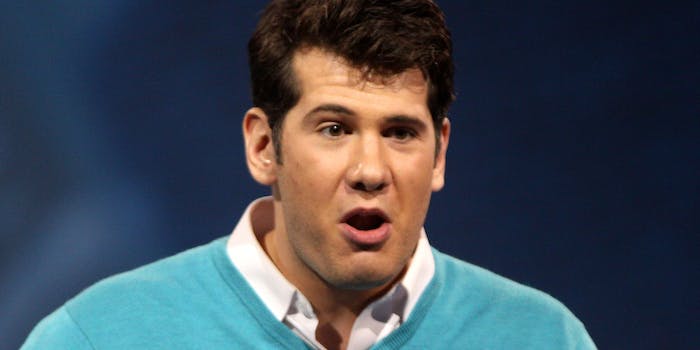 Convicted sex offender Jeffrey Epstein’s death has inspired an endless train of conspiracy theories that the disgraced billionaire didn’t commit suicide, as a medical examiner determined, but was murdered.

Now, right-wing provocateur Steven Crowder is going to try to prove Epstein’s death wasn’t suicide by hanging himself on a live stream.

Tonight we're going to test just how realistic this scenario is… let's just say I'm really sticking my neck out for this one!

Conspiracy theorists like Crowder believe that Epstein couldn’t have killed himself because a bone in his neck, the hyoid, was broken. Numerous outlets have reported that the hyoid is often broken in suicide victims, particular older ones like Epstein, and a 2010 study found the bone was broken in 25% of suicide hanging victims.

Yet the broken hyoid and facts that the guards were reportedly asleep and surveillance cameras nonoperational at the time of Epstein’s death have given fuel to the story. Many also incorrectly believe that Epstein was on 24/7 suicide watch initiated after a prior attempt to end his own life; in fact, suicide watch was discontinued weeks before his death.

Crowder is among those who believe Epstein was murdered by powerful people he had dirt on. Crowder is of the group who believe that Bill and Hillary Clinton are responsible. President Trump himself has spread this conspiracy theory, retweeting Terrence K. Williams accusing Clinton and making the false claim about Epstein being on suicide watch.

It bears mention that some are convinced Trump is to blame. There isn’t evidence of that, either.

Crowder was an early convert to the theory. The YouTube star’s yammering on Twitter about Epstein’s death has reached a fever pitch in recent days as he teases the moment when he will either make a halfhearted, extremely ill-advised, and ultimately unsuccessful attempt to hang himself, or die. His staff might want to note that aiding and abetting a suicide is a crime in most states.

A cat, Quilty, was put in 'solitary confinement' for freeing other cats from a Texas shelter.

To “prove” his theory by failing to break his own neck, Crowder’s team has constructed “an accurate to scale replica” of Epstein’s cell. There Crowder plans to knot a sheet in a noose around his neck, tie it to the bed, and kneel towards the floor until his neck breaks or, as is incalculably more likely, doesn’t.

After he fails to off himself, Crowder will presumably take a victory lap taking gleeful delight that he didn’t die by this not-at-all-serious act of suicide.

Regardless of the outcome of this utterly boneheaded publicity stunt, er, “investigation,” Crowder may face another obstacle for his live stream: YouTube regulations prohibit “graphic images of self harm posted to shock or disgust viewers.” Lucky for him, his fans are already preemptively chalking that up to being further evidence of a conspiracy.

Crowder previously waterboarded himself in a Santa costume while Ben Shapiro watched.