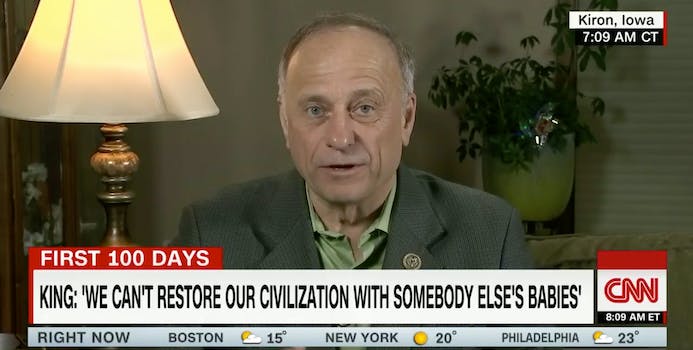 'I meant exactly what I said.'

U.S. Rep. Steve King stood by his recent endorsement of white nationalism in Europe during an interview on Monday morning.

On Sunday afternoon, King, a Republican from Iowa, tweeted his support for the views of Geert Wilders, a far-right Dutch politician. “Wilders understands that culture and demographics are our destiny,” King wrote. “We can’t restore our civilization with somebody else’s babies.”

Wilders understands that culture and demographics are our destiny. We can't restore our civilization with somebody else's babies. https://t.co/4nxLipafWO

King’s tweet was widely condemned by Democrats and other critics as promoting white nationalism and betraying America’s immigrant history, while his Republican colleagues in Congress remained largely silent. David Duke, a former Ku Klux Klan imperial wizard who regularly spouts anti-immigrant, racist, anti-Semitic views on Twitter, cheered him on while attacking his critics.

On Monday morning, King defended his comments during an interview on CNN’s New Day. “Well, of course, I meant exactly what I said,” he said.

King added that he has gone to Europe to promote the ideas of white nationalism as far back as 10 years ago. “It’s a clear message,” King said. “We need to get our birth rates up or Europe will be entirely transformed within a half century or a little more. And Geert Wilders knows that and that’s part of his campaign and part of his agenda.”

King added condemnation of immigrants in the U.S. who fail to “assimilate into the American culture” and stood by his belief that Western civilization is superior to other cultures.

Rep. Steve King doubles down on his controversial tweet: "I meant exactly what I said" https://t.co/onPwAdQ3SD https://t.co/Rkn8J2MMC4

Followers of King were likely not surprised by the lawmaker’s rhetoric. King has long espoused anti-immigrant views and occasionally spread conspiracy theories about former President Barack Obama, including the false claims that he was born outside the United States and is Muslim.