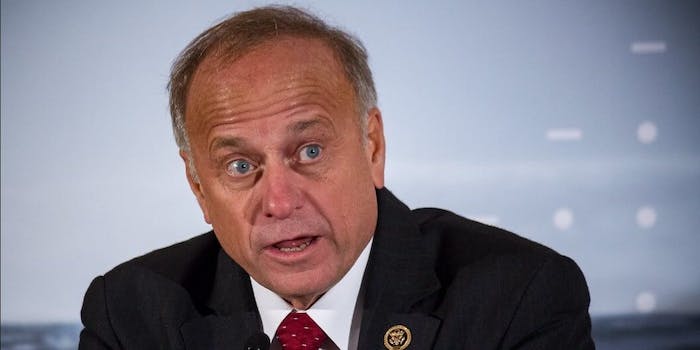 Rep. Steve King (R-Iowa) was duped by a Twitter account pretending to be a Starbucks manager who promised to fire staff for saying “Merry Christmas” because they “personally dislike conservative Christians.”

As first reported by Business Insider, King shared a screenshot of the tweet by @MuellerDad69 on his official Facebook page.

The tweet by MuellerDad69, whose account has since been suspended, said, “I’m the manager of a Starbucks in Charlotte NC. I have informed my employees that they will be fired on the spot if I hear them say ‘Merry Christmas’ to any customers. I’m doing it because I personally dislike conservative Christians.”

Seriously? @MuellerDad69 got suspended from twitter for clear satire while real nazis run wild on this platform?

A representative from Starbucks told Business Insider that MuellerDad69 is not an employee of the chain and was “impersonating a Starbucks store manager,” presumably the grounds for Twitter’s suspension, as the rules prohibit impersonations not clearly labeled satire.

The representative added that baristas are empowered to greet customers as they so choose. Pretty sure that King and his ilk would lose their minds if that greeting happened to be “Happy Kwanzaa.”

Hundreds of people commented on King’s Facebook post that they were going to boycott Starbucks or, alternatively, “protest” by going to a nearby location and wishing the staff “Merry Christmas.” One sarcastically quipped that it would “be a real shame if [MuellerDad69’s] Twitter feed exploded with [Merry Christmas] messages.”

Starbucks itself also commented on King’s post, clarifying that Chris, aka MuellerDad69, doesn’t work for the chain.

Many people were pretty amused that King fell for such an obvious joke, though on Twitter more seemed perturbed by @MuellerDad69’s suspension.

“As obviously fake as that tweet was, it is incredibly sad and slightly hilarious that a major US Politician was gullible enough to fall for this. Or maybe he was just trying to rile up his supporters on the fake war on Christmas,” wrote one person below Starbucks’ comment on King’s post.

I work alongside him every day, every time a conservative asks for 2 shots of hazelnut, I only give them one

I have information that will lead to the arrest of "MuellerDad69"

worst thing about MuellerDad69 getting the hammer is that he duped a bunch of morons with low-hanging "War on Christmas" garbage, but David Fucking Duke gets to keep his account and spew hatred daily.

King has previously come under fire for racist comments and support of racists. King’s January statements questioning why “white nationalist” and “white supremacist” were controversial resulted in him being suspended from all his committee assignments, and led some in his own party to call for his resignation.

Today’s comments by @RepSteveKingIA are appalling and bizarre. As I’ve said before, it’s time for him to go. The people of Iowa’s 4th congressional district deserve better.