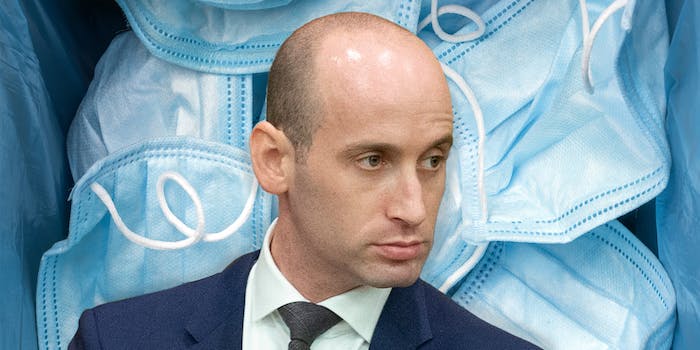 Miller was listed as an employee of the company through 2016.

Stephen Miller is known as one of President Donald Trump’s most inflammatory advisors. And although he’s worked in the Senate before joining the campaign, he also had a side career: real estate.

Stephen Miller’s family owns Cordary Incorporated, a real estate company based in Southern California. And for a time, up until 2016, despite his role as an aide to former Sen. Jeff Sessions (R-Ala.), he was also listed as a vice president with his family’s company.

Now, that business has taken money from the government’s coronavirus funds.

Paycheck Protection Program loans are entirely forgivable as long as the loan goes toward payroll, rent, and utilities.

According to program rules, businesses can only receive one PPP loan. It is possible the Miller family applied through two lenders, and only received one of the loans.

Cordary Inc. did not respond to requests for comment about possibly taking multiple loans.

A White House spokesperson told the Daily Dot that the “White House had absolutely no involvement with this loan or the approval process.”

Michael Miller gave $35,500 on March 17 to Trump Victory, approximately one month prior to receiving the first PPP loan.

He is considered the architect of the Trump administration’s restrictive immigration program. Miller’s critics say his policies are driven by his views on white supremacy.

At one point, Miller also wanted to deny green cards to immigrants who received government assistance or housing subsidies.

The Trump administration’s family separation policy, which has led to the separation and detaining of undocumented immigrant children, was also reportedly the work of Miller.

Since the Paycheck Protection Program began, numerous criticisms from government watchdogs and journalists have shown loans going to Trump donors and members of Congress.

“California Villages,” the rental properties owned and operated by Miller’s family, currently requires all tenants to sign a “Crime Free” pledge saying they will not engage in recreational or medical marijuana use when they live in Miller’s properties.

The pledge allows the Millers’ to terminate any leases for any violation of their “crime free” rules.