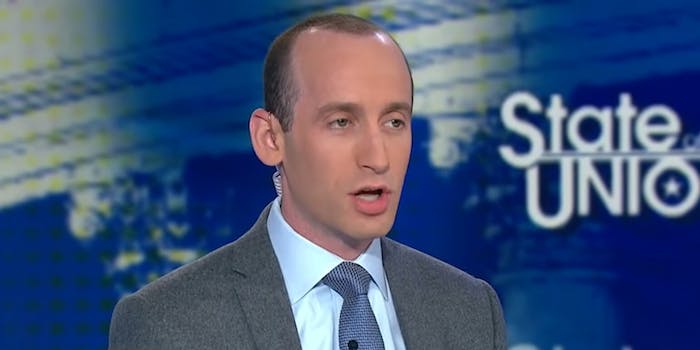 Stephen Miller should be fired, more than 100 lawmakers say

The members of Congress sent President Donald Trump a letter.

More than 100 members of Congress have signed a letter calling on the White House to fire adviser Stephen Miller after a cache of his emails were published where he, among other things, shared a link from a white nationalist website.

The emails were published by the Southern Poverty Law Center’s Hatewatch earlier this month. Since then, scores of lawmakers have called on Miller to resign from his position at the White House, including Rep. Alexandria Ocasio-Cortez (D-N.Y.), who launched a petition asking for the public to sign on.

The letter asking for Miller to be fired, which was signed by 107 members of Congress, was addressed to President Donald Trump and was sent on Thursday.

“We formally request that you immediately remove White House Senior Adviser Stephen Miller from your administration,” the letter begins. “A documented white nationalist has no place in any presidential administration, and especially not in such an influential position.”

“Miller’s emails and the sentiments expressed in them are incompatible with public service and render him unfit to shape any policy—immigration or otherwise. We refuse to tolerate white nationalism and xenophobia in the White House or elsewhere in the United States. Mr. Miller must be fired immediately.”

All of those who signed the letter were Democrats in the House of Representatives.