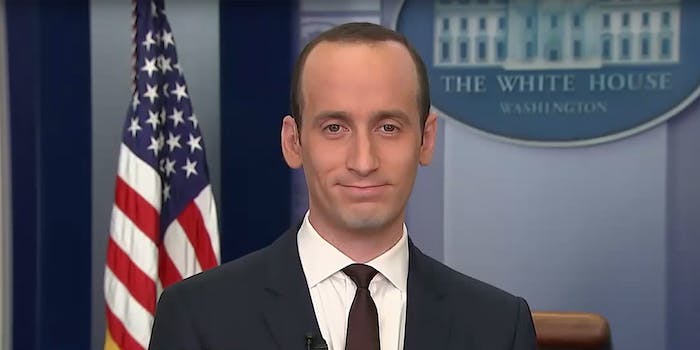 A number of lawmakers have now called on Miller to leave the White House.

Sen. Kamala Harris (D-Calif.) is spearheading a letter that will be sent to the White House on Monday that calls for President Donald Trump to fire adviser Stephen Miller in the wake of emails of his being published, according to a new report.

In November, a cache of emails sent by Miller were published by the Southern Poverty Law Center’s Hatewatch. In them, Miller, among other things, shared a link from a white nationalist website. The emails have sparked a wave of criticism, and a number of people have called on him to leave his post at the White House.

The letter calls Miller “unfit to serve in any capacity at the White House, let alone as a senior policy adviser,” and adds that white supremacy is “what is driving Mr. Miller,” according to the news outlet.

The senators, in the letter, demand that Trump fire Miller in the wake of the emails.

In late November, more than 100 members of the House of Representatives also signed a letter calling on Miller to be fired.

Rep. Alexandria Ocasio-Cortez (D-N.Y.) launched a petition for members of the public to sign that also calls for Miller’s resignation.