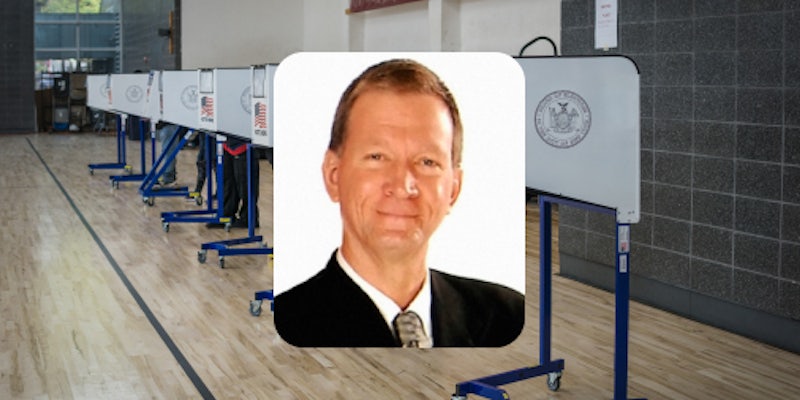 He wrote a manual for how to properly display the Confederate flag.

Florida politics is littered with hate groups, accused Capitol rioters, and far-right extremists. Although many operate in public, or have been outed in recent years, beneath the surface even more malevolent beliefs and ideology can fester.

The Daily Dot recently discovered that one of the companies the state authorizes to provide campaigns and political action committees (PACs) with campaign finance software is owned by an open and avowed white supremacist who still praises the Confederacy.

Stephen Clay McGehee owns Adjutant Workshop, one of eight companies the Florida Division of Elections approves to provide this service. Adjutant Workshop’s software enables campaigns to electronically file contribution and expenditure records. Its website claims its software, called Campaign ToolBox, “has been the most widely-used political campaign finance reporting software in Florida since 1996.”

A representative from the Florida Division of Elections told the Daily Dot that the process to get approved as a vendor of campaign finance software is largely administrative.

To become a vendor, a company requests approval from the Department of State in writing.

“Once the vendor has complied with the requirements for the test, the reports will be reviewed to determine eligibility,” Mark Ard, director of external affairs with the Florida Department of State said via email on Tuesday.

Any company can get approved in Florida so long as its software can perform the required tasks. It’s up to campaigns and PACs to vet their software providers.

Many appear to have not.

For decades, hundreds of them have been choosing McGehee’s company. His client list includes sheriffs, judges, politicians from both parties, and PACs. A person with inside knowledge of campaigns told the Daily Dot that candidates and their campaigns may not have necessarily known about McGehee’s views, but opined some of them must have.

A simple web search for his name brings up websites where he says there is “very clear evidence that efforts to destroy our people and our culture are consistently traced back to Jews, and that Blacks have built an entire business model of playing the victim with our people as the villain.”

McGehee doesn’t make much, if any, effort to hide his extremism. He has a verified Gab account where he often shares racist, pro-Nazi, and other overtly bigoted views. The bio describes him as the president of Adjutant Workshop and lists two websites he runs: thecivilright.org and southernagrarian.com. Both include his full name as the publisher and link his name to subdomains on adjutant.com. All four of these URLs are hosted by Epik, the go-to domain name provider for the far-right. Epik head Rob Monster follows McGehee on Gab.

McGehee didn’t respond to multiple inquiries seeking comment via direct message on Gab and the contact forms on three of his websites. He did post an image of the Daily Dot’s inquiry to his Gab page and said that he could not be racist because he supports Christian missionaries in Africa, could not be an anti-Semite just because he refuses to “give Jews a free pass on criticizing anything that Jews control, no matter how destructive it may be” and can’t be a Nazi supporter because he blocked 51 accounts who were mad at him for making fun of Hitler.

“It’s easy to create lies when you take things out of context and ignore anything that doesn’t agree with your objective,” he said.

McGehee describes his political views as “the civil right,” which he likens to the alt-right with few minor exceptions. He disapprovingly claims that some on the alt-right have embraced socialist ideas, but says he generally agrees with the alt-right’s advocacy for racial segregation. McGehee holds that his version is more gentlemanly, however, because he doesn’t support forced deportation or race-based executions or imprisonment. He just thinks that communities should be able to vote to become racially, religiously, or ethnically homogenous—with some exceptions.

“If a city in Minnesota votes to become a Muslim-only city (Sharia law could not, however, supersede U.S. law), they would have that right,” he writes in a section of one of his sites called “radical freedom of association.”

“And if some areas vote to become a white-only area, that, too, would be perfectly OK.”

The southern agrarian website features a mix of content about living off the land with screeds against cursing and Black culture. Although he’s long owned a tech company, McGehee identifies as a “southern agrarian,” a romanticized view of white southerners and southern culture founded in the Jim Crow era. Even within his musings about fountain pens and backyard chickens, you’ll find references to things like the Nazi motto “blood and soil.”

“Southern Agrarianism is a Blood and Soil movement,” he wrote.

On Gab, McGehee follows a conglomeration of extremists, including white supremacists and neo-Nazis, such as Stefan Molyneux, Identity Evropa, Anthime Joseph “Tim” Gionet (“Baked Alaska”), Richard Spencer, Patriot Front, and VDare. His website lists the neo-Nazi VDare as a page that “generally (but not always) reflect[s] my beliefs.”

McGehee doesn’t simply follow such accounts, he often reshares their content. Some of these posts praise Nazis and Hitler, deride Jewish and Black people, and urge women to be subservient to men.

McGehee’s extremism isn’t a new development or something he’s kept secret. He’s been openly sharing his beliefs online for years.

In 2016, a Twitter account in his name that has the same profile picture McGehee uses across the web tweeted, “White Western European culture is all about building and maintaining a clean society. Blacks destroy things.”

In one of his pinned Gab posts from 2020, McGehee wrote, “The world is now openly hostile to our people, and that’s not likely to change anytime soon. Do everything you can to shield yourself from their grasp. Aim for separation wherever possible.” He tagged a whites-only dating website on the post.

Although he makes a living off American democracy and boasts on LinkedIn about creating “the first software package approved for electronic filing of political campaign finance reports with a state agency,” McGehee yearns for the Confederacy.

He refers to the Civil War as the “War for Southern Independence” and frequently posts photos of the Confederate flag. He says the flag hangs above his central Florida home year-round. He also long ran a website called confederatecolonel.com where he shared views such as that his slave-owning ancestors weren’t racist because they buried the humans they owned in the family cemetery.

“The idea of ‘separate but equal’ really comes into focus here,” he wrote in 2011.

McGehee has been writing these blogs since at least 2007. Florida campaign finance records show that Adjutant Workshop has raked in hundreds of thousands of dollars in that time. On one of his sites, he says this software has “provided a comfortable living” for his family since 1995.

For the 2022 general election, Adjutant Workshop amassed dozens of clients in Florida who’ve thus far paid him a cumulative $16,000. His company is also authorized to do business in Kentucky and Pennsylvania, though the bulk of its client list is in Florida.

Adjutant Workshop provides software that candidates and PACs use to comply with states’ statutory and administrative campaign finance reporting requirements. For $140/year, clients receive a license to use its software to track their expenditures and contributions. According to the website, “Once a contribution record has been entered, that data can then be used for creating mail merge ‘thank you’ letters and labels, internal staff reports, and other campaign management functions. Expense records can be used to generate laser-printed checks.”

Current members of the Florida House of Representatives paid for his software as recently as last month. Judicial candidates and PACs representing a wide variety of interests have also hired Adjutant Workshop in the last year. It’s not clear if any of the individuals and entities who hired McGehee were aware of his views.

The candidates who’ve hired him this election cycle include members of both parties, per those records, though significantly more Republicans engaged his services than Democrats. McGehee claims his political experience includes being a Republican convention delegate and the vice-president of a local Republican group.

The Daily Dot contacted multiple candidates in Florida and Kentucky. None of them responded to emails and inquiries about whether they were aware of McGehee’s white supremacist views.

One of McGehee’s clients is Florida Secretary of State Cord Byrd. According to state records, then-Rep. Byrd (R) paid Adjutant Workshop $140 each of the last two years.

His office said that Byrd didn’t personally choose to do business with Adjutant Workshop.

“Secretary Byrd used a third-party financial management company which used approved vendors to report campaign finance to the Division of Elections,” Ard from the Department of State said when speaking with the Daily Dot.

“Secretary Byrd does not agree with the abhorrent statements you pointed out in your email nor did he monitor social media,” Ard added.