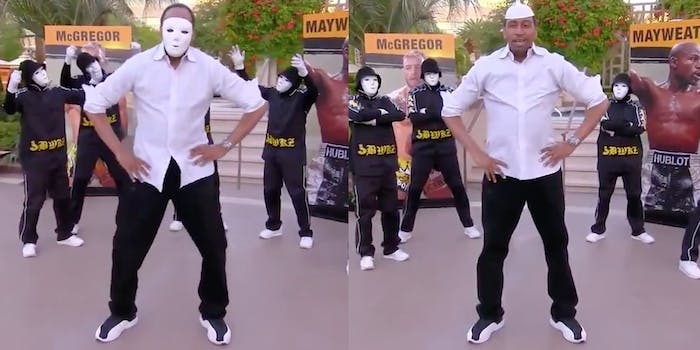 Stephen A. Smith is bizarrely being accused of ‘white face’ for wearing Jabbawockeez mask

Twitter users were quick to point out the absurd comparison.

Sports commentator Stephen A. Smith was accused of “white face” on Twitter Friday after posting an old video of himself dancing.

The footage shows Smith alongside the popular hip-hop dance crew known as the “Jabbawockeez” while wearing the group’s iconic white face mask.

The tweet, which garnered well over 7 million views, quickly descended into chaos after a handful of users began accusing Smith of “white face.”

“Let me get this straight, no problem with a black man wearing a white face mask ?? But a white man wearing black face is being a racist???” @VecchiarelliDom wrote.

Others attempted to criticize Smith for the mask as well while claiming that a “double standard” exists.

“As a white person I find this offensive,” @johnnynapa wrote. “Double standard.”

While it’s unclear whether all those piling on were serious, the tweets kept coming.

But for the handful of Twitter users who complained, a vastly larger number pushed back.

“I really wish these people would use Google once in awhile. That’s not ‘White face,'” @Captian_Tweet said. “Those are the Jabbawockeez. A dance group that has been wearing those masks for years.”

Many called out the false equivalency, noting that the white mask is not even intended to portray white people and is not the same as white people wearing black face paint with the intention of imitating and mocking Black people.

It remains unclear if Smith, who has not responded to any of the tweets, is aware of the chaos in his mentions.