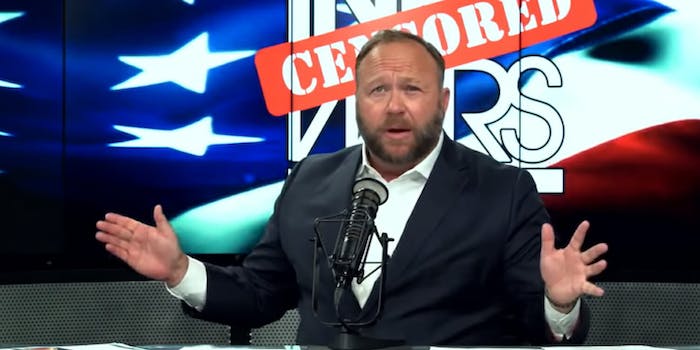 Another tech platform is cracking down on the InfoWars host.

Spotify, the music streaming app, has removed “specific episodes” of InfoWars host Alex Jones‘s podcast because of reports of “hate content,” according to a new report.

“We take reports of hate content seriously and review any podcast episode or song that is flagged by our community,” Spotify told the newspaper. “Spotify can confirm it has removed specific episodes of ‘The Alex Jones Show’ podcast for violating our hate content policy.”

The removal from the music streaming app is another blow to Jones, whose shows peddle in conspiracy theories, and who has faced backlash from several major social media platforms in recent weeks.

Last week Facebook banned Jones for 30 days for violating community standards after receiving reports from users about four different videos posted on InfoWars and other pages operated by the host.

Just days before that, YouTube gave Jones’ InfoWars channel a strike, which includes not being allowed to broadcast livestreams for 90 days. The content in question included hate speech against Muslims and transgender people.

In the midst of this, the host began posting about his podcasts on Spotify–which brought about an intense backlash.

You can read all of the Washington Post’s report here.