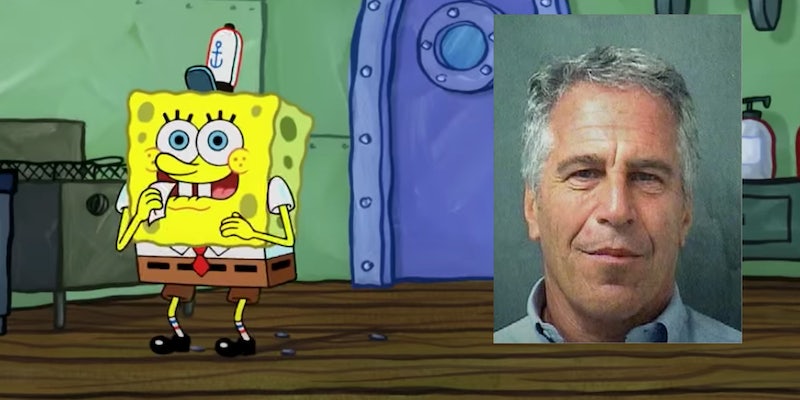 The allegation is obviously false.

Conspiracy theorists are convinced that they have found a connection between the cartoon character Spongebob Squarepants and deceased sex offender Jeffrey Epstein.

In a post on Instagram this month, a user showed what he claimed was a screenshot proving that Epstein’s home address was listed on Spongebob’s driver’s license.

The purported subliminal message, according to the Instagram user, proves “how sick the people are that run this system.”

The Instagram user’s proof is cell phone footage of his computer screen that shows grainy images from the search engine DuckDuckGo. The user goes on to also make a connection to the Disney film Monsters Inc., which QAnon supporters believe references the harvesting of Adrenochrome.

The user then argues that his post will likely be targeted by fact-checkers, hell bent on hiding the truth. The post’s comments were also flooded with comments from those who believed in the Spongebob conspiracy theory.

“They are not humans,” one user wrote of the so-called elite. “Draconians Reptilians Empire.”

Others unleashed bizarre rants of their own, and one user even thanked the Instagram page for sharing what they felt was viral information.

Yet for any fan of Spongebob or those who are critical of outlandish claims on social media, the allegation is obviously false. In fact, the conspiracy theory first surfaced in 2020.

Replicating the video by searching for “Spongebob Epstein island” in images on DuckDuckGo appears to suggest that the original claim originated on TikTok.

The TikTok video in question correctly points out that Spongebob’s address in the show is 124 Conch Street, Bikini Bottom, Pacific Ocean. The video then cuts to the same address on Google Maps, which shows the address as originating from Little Saint James, the notorious private island owned by Epstein.

A similar version of the conspiracy theory from 2020 alleged that 124 Conch Street led specifically to a theme park on the island called “Ledges of Little St. James.” Yet it was noted at the time that internet trolls are known to add fake listings to Google Maps, an issue that has been present for around a decade.

Despite the claims made online, the global elite did not secretly brainwash fans of the cartoon by listing Epstein’s address on Spongebob’s driver’s license.