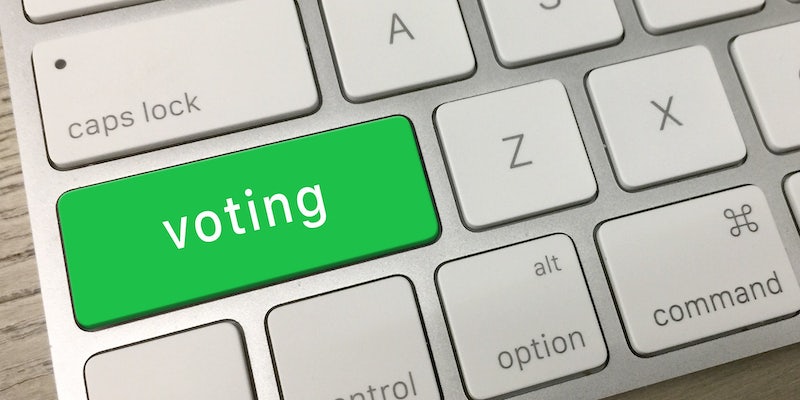 They think votes are being changed remotely.

One of the pervasive and ultimately debunked conspiracies about the 2020 election was that voting machines were connected to the internet, allowing bad actors access to change tallies. While it’s never been proven, because it’s false, it has a way of surviving myriad debunks.

The same theory has reemerged in the midterms. Conspiracists all over the internet have urged one another to check the Wi-Fi connections at their polling stations, convinced it proves that voting machines are connected to the internet.

“Be sure to check the wireless signal at your polling place—and if you can go back the next day to contrast and compare,” wrote one Gab user.

“The people in charge of the machines claim this is so they can communicate with each other locally and not externally but if you can see the wireless then you can hack the wireless,” they added.

They shared a screenshot purportedly from a polling station showing that one of the available connections is called “PollPad Wi-Fi Secure.”

The QAnon+ Telegram channel claimed, “I just voted and I checked the Wi-Fi in the voting station and I saw 7 different Wi-Fis.”

QAnon+ also urged people to “contact us immediately” if they witness fraud and provided an email address for Project Veritas.

“They’re cheating again,” one person tweeted in response to such claims.

Some seem to believe that the presence of a Wi-Fi connection at a polling station proves voting machines are hooked up to the internet. Yet many polling stations are in places that require wireless internet to function in today’s world, such as schools and libraries.

It’s also true that most public spaces have Wi-Fi, and other connections, such as people’s cell phones, are often visible when you search for Wi-Fi. Further, people can name their Wi-Fi connection anything they want.

But to conspiracy theorists, an internet connection within the range of a polling place can only mean that something nefarious is afoot.

“Election machines are not supposed to be connected to the internet as that is how most of the election fraud took place in the last election,” wrote the It’s Always Been About the Children Telegram channel.