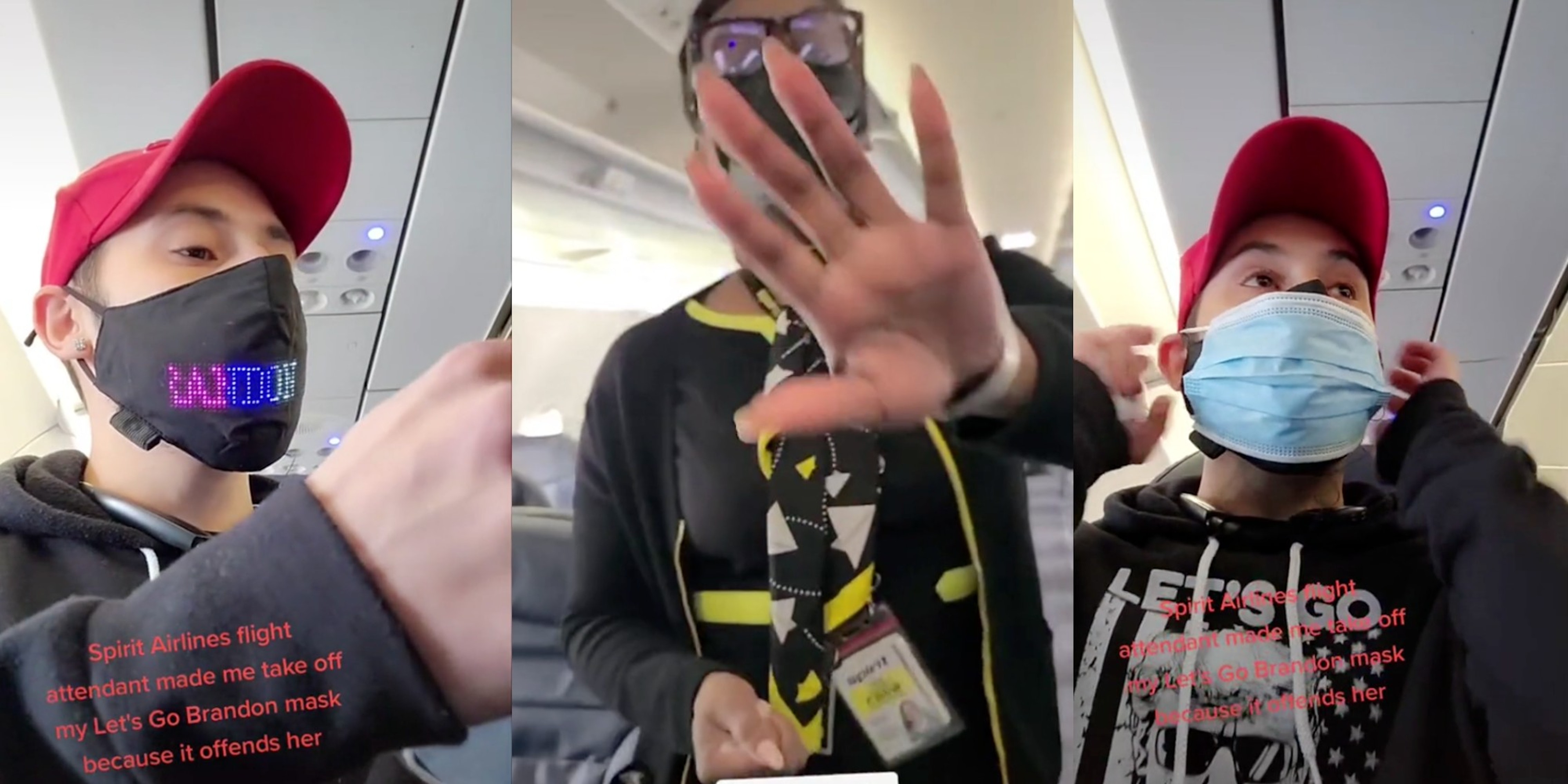 ‘This is not America anymore’: Man says Spirit Airlines made him remove ‘Let’s Go Brandon’ mask during flight in viral TikTok

A supporter of President Donald Trump claims that he was ordered to remove his face mask during a flight on Friday due to its political messaging.

In footage uploaded to TikTok, Adam Radogna, who was flying from Ohio to Florida on Spirit Airlines, can be seen wearing an electronic mask featuring the phrase “Let’s Go Brandon FJB.” The slogan, popular among conservatives, is code for “Fuck Joe Biden.”

Shortly after reaching his seat, Radogna is approached by a flight attendant who states that terms deemed offensive are not allowed to be displayed before asking him to instead wear a mask supplied by the airline.

“Spirit Airlines flight attendant made me take off my Let’s Go Brandon mask because it offends her,” Radogna wrote.

Despite attempts to question the decision, Radogna is told by the flight attendant that there will be no “back-and-forth” discussion.

In response, Radogna can be heard repeatedly stating “this is not America anymore” to the passenger sitting next to him.

Radogna goes on to accuse the private company of violating his First Amendment rights, which bars Congress from passing laws that limit free speech.

The Trump supporter also notes that he he was not asked to remove his sweatshirt which likewise used the phrase “Let’s Go Brandon.”

The Daily Dot reached out to Spirit Airlines to inquire about the incident but did not receive a reply by press time.

The video has since been viewed more than 145,000 on TikTok alone. In a follow-up video, Radogna can be seen confronting several flight attendants after reaching his destination.

A male flight attendant tells Radogna that political statements are barred. Radogna responds by arguing that a mask featuring the phrase “Black Lives Matter’ would likely be allowed.

When the flight attendant asks what the slogan means, Radogna suddenly claims that his first name is actually Brandon.

While Spirit Airlines does not appear to have released a statement on the matter, the company did respond to at least one Twitter user who referenced the incident.

The company ultimately stated in a generic message that Radogna could reach out to them over direct message to lodge a complaint.

Update 5:54pm CT, Jan. 28: Radogna says via Twitter DM that Spirit Airlines told him that they are investigating the matter. He also says he’s “thinking about suing them.”