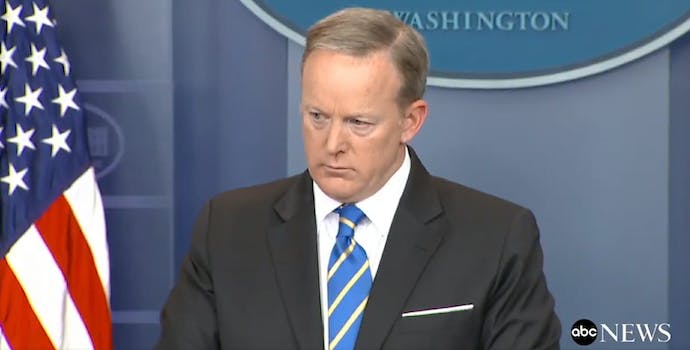 The answers were the same as last week: non-answers.

White House Press Secretary Sean Spicer continued to repeat the same answers on Monday when reporters repeatedly questioned him about specifics regarding the “tapes” President Donald Trump suggested he had of conversations with former FBI Director James Comey.

Several reporters asked about the alleged tapes on Monday—including whether the Trump administration would adhere to lawmaker requests to hand them over.

The answers were the same as last week: non-answers.

When asked directly whether there were recordings, Spicer continued to refuse to deny the existence of any Trump–Comey tapes.

Hallie Jackson of MSNBC asked Spicer that if he refuses to neither “confirm nor deny” if Trump has tapes of conversations he had with Comey, how any official would feel comfortable speaking privately with the president in the White House.

“The president has made it clear what his position is,” Spicer said, repeating himself. “I’ve answered the question over and over again the same way.”

The same answers were repeated several times throughout the press briefing on Monday afternoon.

.@PressSec said 7 times that Trump's position is "clear" or that there is "nothing further to add" re: Trump recording conversations

On Friday, Trump tweeted a vague threat at Comey, saying, “James Comey better hope that there are no ‘tapes’ of our conversations before he starts leaking to the press!” During that afternoon’s press briefing, Spicer refused to answer questions regarding Trump’s “tapes” tweet—sticking to a response that centered around the president having “nothing further to add on that.”

Since Trump’s initial tweet, it has sent Washington into a frenzy, with the Democratic member of the House Oversight Committee asking the White House to turn over any recorded conversations between Trump and Comey.

In a letter to White House counsel Donald McGahn, Rep. Raja Krishnamoorthi’s (D-Ill.) asked for tapes the Trump may have of conversations with Comey, meetings he had with Russian officials that were closed to members of the press and any conversations that existed regarding the hiring and firing of former National Security Advisor Michael Flynn.

Rep. Adam Schiff of California, the ranking Democrat on the House Intelligence Committee, also called for Trump to “immediately provide any such recordings to Congress.”

“If the President has ‘tapes’ of his conversations with Director Comey, it is because the president himself made them,” Schiff said in a statement. “For a president who baselessly accused his predecessor of illegally wiretapping him, that Mr. Trump would suggest that he, himself, may have engaged in such conduct is staggering.

“The president should immediately provide any such recordings to Congress or admit, once again, to have made a deliberately misleading — and in this case threatening — statement.”

Lawmakers aren’t the only ones looking for the Trump-Comey tapes. WikiLeaks has offered $100,000 for anyone who gives them tapes of Trump and Comey speaking.