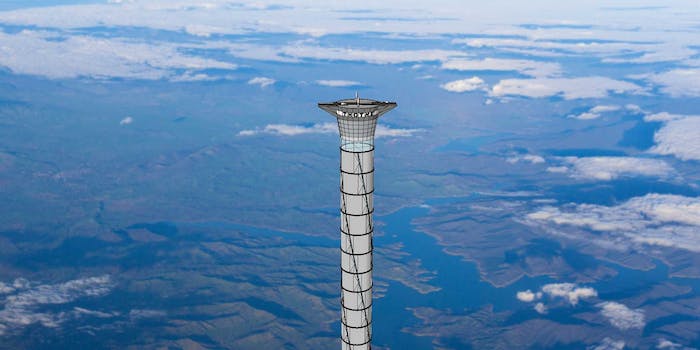 Seems like an awful lot of work just to leave Canada.

A new patent from a Canadian technology firm would allow you to skip the stairway to heaven and just take the elevator.

The proposal from Thoth Technology, dubbed “space elevator” on the patent, suggests building a towering 12.4 mile-high shaft that would be able to transport cargo and space travelers closer to the edge of the atmosphere.

The tower would consist of an inflatable exterior, with reinforced segments throughout. A runway would sit atop the building and would serve as a launching pad for various space travel operations.

While the idea sounds like it’s straight from the Donald Trump playbook of building development—right down to the name of the elevator, dubbed “ThothX Tower”—Thoth Technology believes the plan is more than feasible.

“Our plan is to start with a 1.5 km [about 1 mile] demonstrator within five years in order to create construction capacity and prove control technologies,” Thoth Technology CEO Dr. Caroline Roberts told the Daily Dot. From there, she expects the tower could reach its peak height of more than 12 miles within within 10 years.

“The mass is about the same as a super-crude tanker that moves oil around the globe,” Roberts said. She estimates the cost of the completed tower to be around $5 billion. 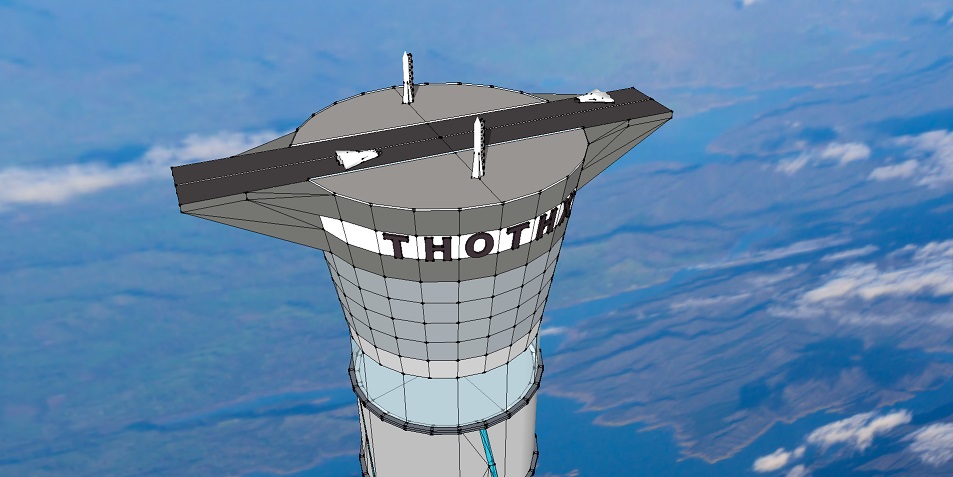 Thoth isn’t the first to propose such an idea; the concept of the space elevator was first published by Konstantin Tsiolkovsky in 1895. (Though if you want to go biblical, you could technically count the Tower of Babel.) The Russian rocket scientist developed the idea for a free-standing tower that reaches toward the sky as part of a thought experiment only to have the concept built upon by others in the field over the course of the next century, including the recent Kickstarter-backed efforts of LiftPort.

Many of the previous space elevator concepts stretch well beyond the 12-mile mark Thoth intends to reach. Early iterations suggest building a tower that tops out in geostationary orbit, about 22,000 miles up.

What sets the space elevator patented by Thoth apart is the stabilization control method. Most space elevator proposals struggle to reconcile the lack of structural support required to build so far into the sky. Roberts explained her company’s proposal includes “a harmonic control strategy to control and adjust the orientation of the building in order to counter external forces, such as hurricanes.”

Thoth also won’t require any proprietary materials in order to create its literal sky scraper; Roberts said the tower would consist primarily of Kevlar and polyethylene. This theoretically makes the process more like a traditional construction project, albeit one that would be 20 times taller than the Dubai’s Burj Khalifa, the current tallest manmade structure in the world.

“We are interested in talking with the developers of the world’s tallest buildings, including Mohamed Alabbar,” Roberts said. Alabbar is the man responsible for the Burj Khalifa.

Should Roberts and Thoth Technology find a parter to help bring the patent to life, expectations for the tower’s capabilities are broad. Roberts sees the primary applications as rocket launches, wind-energy generation, communications, and tourism.

“Launching from the top of the tower is 30 percent more efficient for rocket launch, equivalent to a new single-stage-to-orbit technology,” she explained.

Roberts also claimed the tower would be able to generate 1 gigawatt of energy because turbines could be located across the jet stream, where winds blow 98 percent of the time opposed to 15-to-20 percent of the time on the Earth’s surface. The collected energy would be enough to power about 700,000 homes.

She also stated communications from the tower would have “about 100 times less latency compared with communication by satellite.”

“The towers should also prove popular with tourists: from the top of the tower, you will be able to see the bright blue limb of the Earth with a view extending 1,000 kilometers [620 miles],” Roberts said.

The Daily Dot reached out to experts in the fields of space exploration and astronautics to inquire about the feasibility of Thoth Technology’s proposal. None felt they had the expertise to comment on the concept of a space elevator, though there was little optimism about the likelihood of one ever being built.

H/T the Telegraph | Photo via Thothx.com