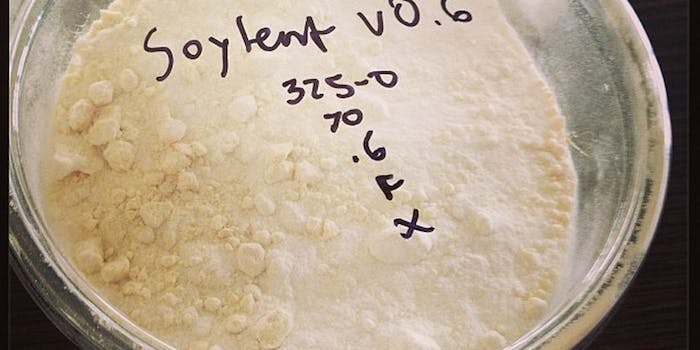 Software engineer Rob Rhinehart has raised $220,000 for Soylent, a nutrient shake he survived on for 30 days.

A couple months ago, 24-year-old software engineer Rob Rhinehart whipped up Soylent, a cocktail of “vitamins, minerals, and macro-nutrients,” and started ingesting it instead of food. He purportedly ate nothing but the nutrient shake for 30 days, and he documented the process on his blog. We called him the Post-Food Man. The Internet soon went nuts, and many post-food wannabes started bombarding Rhinehart with requests for some of the disgusting-sounding elixir.

So he did what anyone does with such a product nowadays—he crowdfunded an operation to start brewing up Soylent en masse.

Rhinehart launched a campaign on Crowdhoster. And, despite doing his best to ward off investors by producing a video resembling an ad for a parody product in a sci-fi B-movie and apparently recording the audio at the bottom of a mine shaft, the project was funded within hours. And the cash keeps pouring in. As of this writing, Soylent had attracted over $220,000 in funds, and there’s still a month to go.

For many people, on many occasions, food is a hassle, especially when trying to eat well. Suppose we had a default meal that was the nutritional equivalent of water: cheap, healthy, convenient and ubiquitous. Soylent will be personalized for different body types and customizable based on individual goals. It allows one to enjoy the health benefits of a well balanced diet with less effort and cost.

So yeah, that means they’re actually going to start churning this stuff out—in an “FDA-approved facility”—and selling it on the market. It’s all pretty incredible. I mean, I’d always thought that as far as unmarketable product ideas go, a grey-colored chemical drink named after processed human flesh wafers would sit right atop the list. (Rhinehart does point out that in the less-famous novel on which the cult film Soylent Green was based, soylent was made of soy, but everyone on the planet except maybe the book’s author is thinking ‘… is people’)

Rhinehart and company do warn that “All scale production efforts have the potential for setbacks including supplier issues, manufacturing issues, sourcing, contaminants, and proper control.” So all you post-foodies might not want to get too excited; Soylent may be a while off yet.

By Brian Merchant | Photo via Soylent