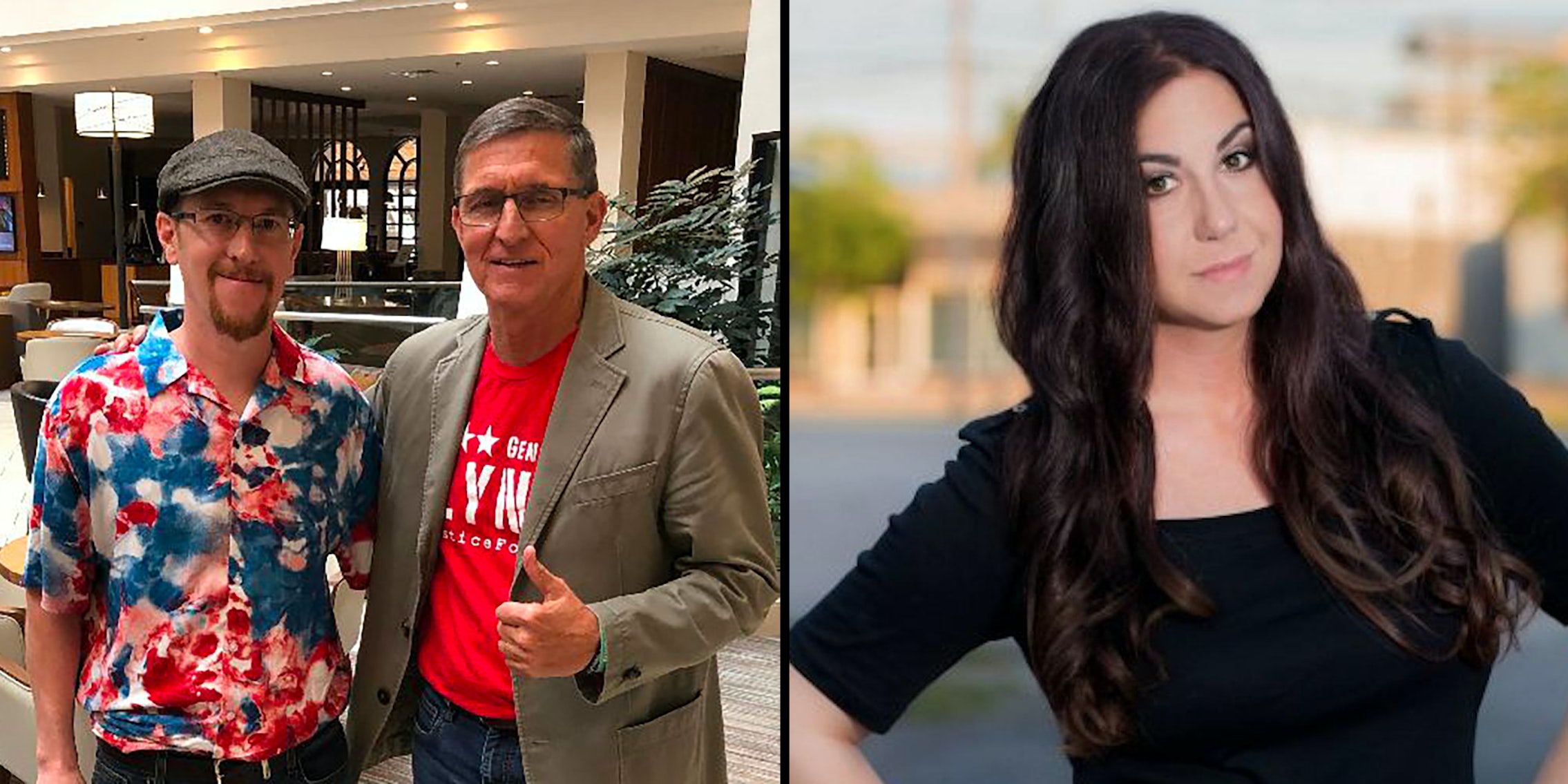 Matthew McDaniel said he just wanted to warn people about Flynn and QAnon.

A South Carolina man is suing a bevy of characters active in QAnon and South Carolina Republican politics, alleging he was physically assaulted at the Rock the Red event last month.

Matthew McDaniel is suing early QAnon proponent Tracy “Beanz” Diaz, Rock the Red, its organizer, and several members of Republican Party of Horry County, South Carolina, along with the local party itself. Of the defendants in the suit, only the local party responded to request for comment.

“Our view is that the lawsuit against the HCGOP is frivolous. We have no other comment at this time,” Robert Slagle, chair of the Horry County GOP (HCGOP), told the Daily Dot via email.

A livestream of the Rock the Red shows McDaniel, wearing a grey bowler hat and bright Hawaiian shirt, approach a microphone five minutes after headliner Michael Flynn finished his speech. “General Flynn is the biggest scumbag traitor in the history of this country next to Donald Trump,” McDaniel said, reading from a paper, which was later found on the floor.

McDaniel told the Daily Dot that he thought at the time, “At least one person has to stand up and tell the truth. That’s all I did, I stood up and told the truth, and obviously they didn’t like it.”

In the video, two men standing nearby quickly grab McDaniel in an apparent attempt to get the microphone away from him. A third, larger man, Chad Caton, also a defendant in the suit, joins the fracas and swiftly takes McDaniel to the ground.

Another video, captured moments later, shows Caton in a crouched position with his hand on the back of McDaniel’s neck. “Everybody listen up,” a man who is not named in McDaniel’s lawsuit, says. “Everybody listen. This is good right here now. We’re gonna drag this ol’ boy out here like a puppy.”

McDaniel climbs to his feet, then is forced to the ground again. In the video, Caton admits to pushing McDaniel down twice.

“When I took him to the ground, he kind of laid there because I think I knocked the wind out of him a little bit,” Caton says.

Caton, who reportedly spit in the face of an HCGOP candidate earlier this year, has framed his actions as protecting Flynn from McDaniel and McDaniel from the crowd.

Caton escorted McDaniel out, where event security detained him until police arrived. McDaniel was arrested and charged with disorderly conduct.

Afterward, the spin machine kicked into overdrive, according to McDaniel’s account.

HCGOP released a statement on its website and Facebook page claiming that McDaniel had a weapon, infiltrated the event, identified himself as antifa, and was a threat to Flynn. It heralded Caton as a hero. “We are thankful that Mr. Caton was in the right place at the right time and was able to help defuse what could have been a very dangerous situation. He maintained control until security could take over,” it says.

The statement is signed by Slagle and Diaz, executive committeewoman of the HCGOP. Diaz, who was one of the first proponents of QAnon, was elected to the HCGOP this April.

Diaz addressed the incident involving McDaniel on her show, Dark to Light with Frank & Beanz, on June 7. She referred to McDaniel as a “potential killer,” claimed he had “some kind of weapon,” and credited Caton, whom she had on as a guest, with saving the day.

“Am I looking at a possible operation to take down General Flynn?” said Caton. “That’s where my mind goes.”

Rock the Red organizer Pressley Stutt posted his official statement in a comment on HCGOP’s Facebook page. In it, Stutts also praised Caton for saving them from a potentially “deadly” situation and pilloried McDaniel as an “infiltrator” who was carrying a martial-arts style weapon when he attempted an “antifa style attack.”

Nearly everything about the defendants’ telling of events, McDaniel says, is utter fiction. “They created a false narrative,” he said. “They even used the word ‘terrorist.'”

According to the police report posted by a local outlet, officers didn’t find a weapon on him. He’s not antifa. “I don’t know if there’s even such a thing in South Carolina,” he said. And he wasn’t an infiltrator but a paid attendee of a public event, he said.

As to whether he was a threat to Flynn, McDaniel said Flynn wasn’t even in the room when he picked up the microphone five minutes after the former lieutenant general finished his speech. And, contrary to Caton’s claims, McDaniel says he didn’t strike him. None of the videos the Daily Dot reviewed show either a weapon in his hand or him hitting Caton, whom the suit notes is significantly taller and heavier than McDaniel.

The only thing about their accounts that is true, McDaniel says, is that he had a paper with his prepared remarks in hand. He planned to warn the crowd that QAnon is a Russian psychological operation and accuse Flynn of treason and of working for Russia. (In 2017, Flynn pled guilty to lying to the FBI about his communications with Russia.)

“Their goal is to start a civil war in the United States,” McDaniel’s prepared statement reads in part, “They must be stopped now before it’s too late.”

He also planned to say that he was placing Flynn under citizen’s arrest for treason and for attempting to overthrow the government. McDaniel told the Daily Dot that he didn’t actually plan to attempt to arrest Flynn.

“It was just a symbolic gesture. I took a picture with him earlier in the day. I could have done it then if I wanted to have physically perform it,” he said. He provided the Daily Dot with the picture. In it, Flynn is smiling and giving a thumbs up. McDaniel is wearing the same Hawaiian shirt and hat shown in videos from the day.

He does believe that the Russian government has actively promoted QAnon and that Flynn is a traitor, and former President Donald Trump is also compromised by Russia.

McDaniel, 41, said that he’s a lifelong Republican and Navy veteran. In 2016, he couldn’t bring himself to vote for Trump, so he voted for Gary Johnson. Last year, he voted for President Joe Biden. McDaniel recalled first hearing about QAnon in its early days in 2017.

QAnon, the conspiracy theory that a cannibalistic group of satanic pedophiles controls the world, presented McDaniel, an amateur sleuth, with a mystery to solve. Alarmed yet fascinated, he watched as it grew and festered in American life. Eventually, he came to believe that Russia was using the conspiracy theory to divide Americans and undermine the United States’ standing on the world stage.

In the early days, he’d try to set friends who became wrapped up in the conspiracy theory on the right course. Now, if people don’t listen to reason, he simply blocks them. Then, after Trump lost the election, QAnon set its sights on South Carolina, his home state.

“They’re using Horry County as a template for the QAnon coup,” McDaniel said.

When Rock the Red came to South Carolina, he felt it was his duty to attend, both to gather information, and to say his piece. For his efforts, McDaniel says he was body slammed, punched, and defamed. His back hurt for days afterwards, he said. “It still hurts a little,” he said.

He’s suing because he thinks those responsible should face the consequences.

“[I want to] hold the people that assaulted me and defamed me accountable for their actions and their words and I want to get an apology. I want them to apologize,” he said.

The episode has the HCGOP in disarray. McDaniel has offered to drop the suit against it if Diaz, Slagle, and the vice-chair, who also signed the statement about him, resign. On Monday night, the HCGOP executive committee held a meeting to vote on seeking their voluntary resignations. They did not reach the quorum in attendance required to vote on party business. On Monday before the meeting, a member of HCGOP, who asked to remain anonymous, confirmed that the meeting was scheduled but said the three weren’t going to attend. If unsuccessful, they said, executive committee members will call another meeting for the same purpose. Meetings can be called by 10% of the executive committee.

On Monday, Diaz, Slagle, and the HCGOP responded to McDaniel’s suit in a letter. Through their attorney, they denied his claims and characterized his action as politically motivated.

Meanwhile, the disorderly conduct charges remain pending against McDaniel in Greenville, some 250 miles from Horry County, where it has caused so much drama. He looks forward to defending himself.

“I hope they don’t drop the charges. I hope we go to court. I hope these people testify in court.”

Correction: This post originally misidentified who was speaking in a video of McDaniels’ alleged assault. Their identity is unknown.