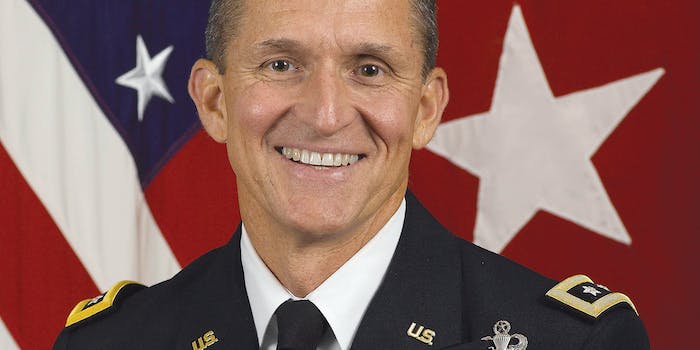 Retired Army Lieutenant General Michael Flynn holds himself out to be quite the patriot. Being hyper-patriotic is practically part of the job description for heroes to followers of QAnon, the conspiracy theory that the planet’s controlled by satanic cannibalistic pedophiles.

So it came as something of a surprise to people that Flynn appeared to flub the words to the Pledge of Allegiance at a rally held by his fellow QAnon idol, L. Lin Wood.

“I want you to hear every single word of the Pledge of Allegiance,” Flynn told the crowd. Flynn then ordered them to remove their hats and put their hands over their hearts.

He got it wrong from the beginning. “I pledge of allegiance to the flag of the United States of America.”

The addition of a simple “of” could have been overlooked but it went further downhill from there. “Individual,” he said, wrongly, then trailed off into awkward silence.

Luckily, the crowd knew the words and carried on without him. Flynn chimed back in at “one nation under God,” then incorrectly said “individual” again. (The actual word is “indivisible.”)

A video of the clip posted by former Marine Ron Filipkowski has 1.6 million views. “What kind of ‘patriot’ general doesn’t know the pledge!” Filipkowski commented.

Insults piled up in the comments on Filipkowski’s tweet.

“’I want you to hear, not just listen—Every. Single. Word.’ The build-up is what makes it exquisite comedy,” Helen Kennedy said.

Even people from foreign countries said they know the words to the Pledge of Allegiance.

Several joked that Flynn intentionally messed it up because his allegiances lie elsewhere.

“I bet he knows the Russian version,” quipped @Leslieoo7.

As the mockery piled up, Wood rushed to his friend’s aid, claiming that Flynn intentionally messed up the words “to highlight the words,” as if everyone who’s attended elementary school or a local government meeting in America doesn’t have the Pledge of Allegiance permanently embedded in their brains.