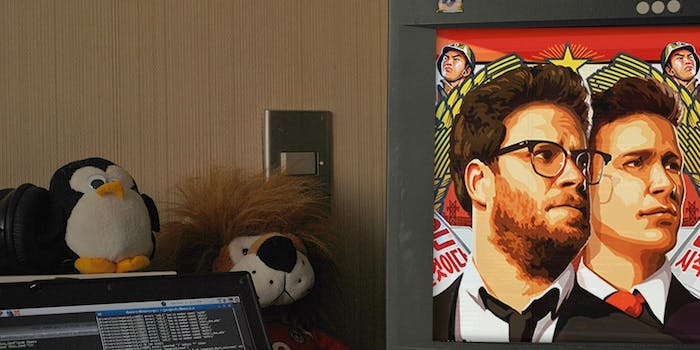 Photos via Dave_B_/Flickr (CC BY 2.0) and The Interview | Remix by Fernando Alfonso III

Sometimes the best offense is declining to play defense.

On Wednesday, Sony Pictures Entertainment gave in to pressure from the hackers who had been plaguing the studio for weeks and cancelled plans to release The Interview in theaters on Christmas Day. With the studio’s indication that it also won’t be releasing the movie as a streaming video on demand, it appears as if Sony has all but given up efforts to recoup the over $44 million it spent making the film.

The hacker group Guardians of Peace, which is widely believed to be working for North Korea, likely had two goals in breaking into Sony’s email system and then making a grand spectacle of releasing what it had stolen to the public. The first was to prevent people from seeing a film where stars Seth Rogen and James Franco assassinating North Korean dictator Kim Jong-un. The second was to discourage other entertainment companies from releasing any content critical of the country’s ruling regime.

Considering another movie house has subsequently cancelled its planned production of Pyongyang, a graphic novel-based thriller starring Steve Carrell and helmed by Pirates of the Caribbean director Gore Verbinski, the latter ship has already sailed. There won’t be many major potion pictures made about North Korea for the foreseeable future.

However, if Sony wants to at least win a moral victory over its cyberattackers and allow The Interview to reach the widest possible number of viewers, all it has to do is sit back and let the Internet do what it does best.

Sony scrapped the movie’s release after Guardians of Peace threatened 9/11-like terror attacks anywhere the movie was screened. As a result, a number of major theater chains declined to screen the film. Whether or not the threats were credible is beside the point, any theater that showed The Interview risked scaring patrons away from seeing not just that film, but everything else playing in the building. A multiplex’s decision to stand up for Rogen and Franco’s right to make fart jokes at the Hermit Kingdom’s expense could tank the box office of its entire holiday season.

Sony killing The Interview was about more than just a fear of exposing theatergoers to physical harm. Now that Sony has given Guardians of Peace what it wants, presumably the steady stream of email leaks will quickly come to a halt. Revelations produced by the leaks, such as Sony Entertainment CEO Michael Lynton’s dismissive email about college sexual assault claims and proof that even the people tasked with putting out lowbrow Adam Sandler movies hate lowbrow Adam Sandler movies, were endlessly embarrassing for the studio.

The hackers didn’t drop the emails all at once, instead electing to release them online in large chunks. However, what’s been let out so far only represents a fraction of the hackers’ total haul. A desire to plug the leaks is likely why Sony pushed the option of selling The Interview as an online video off the table.

In addition to pledging not to distribute the movie, Sony has also stopped advertising it.

The irony here is that, while The Interview was only garnering middling reviews and probably wasn’t going to be a blockbuster smash, the controversy swirling around the film as a result of the attack has raised the public’s appetite to see it to a fever pitch.

One Reddit user posted this meme with the title “After hearing that Sony pulled the plug on ‘The Interview’“: 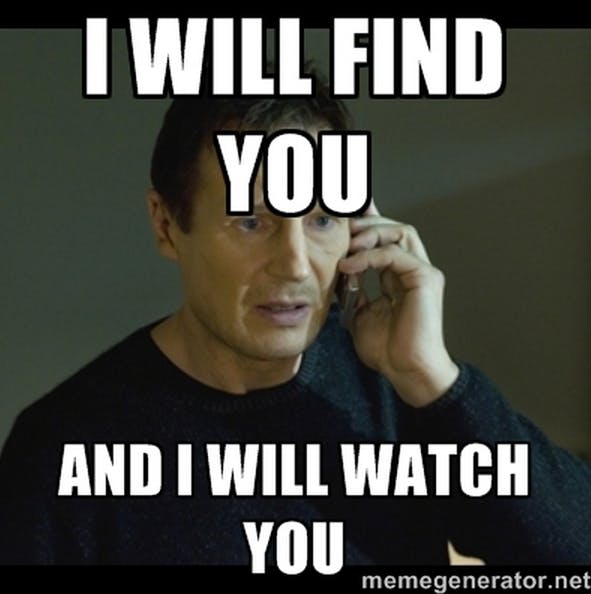 The post garnered over 4,000 upvotes. Posters for the film are now selling for over $500 on eBay.

Sony now has bona fide  hit on its hands that it can’t make a penny off of or else suffer the consequences.

Studios always insure their movie productions against disaster, but the uniqueness of this situation may have landed Sony in a especially difficult situation. Brian Kingman, managing director of one of the film industry’s top entertainment brokers told USA Today that its unlikely that Sony’s insurance covered corporate cyberterrorism that caused the studio to voluntarily pull the film so soon before it was to hit theaters.

“If there’s a voluntary withdrawal from the marketplace, there is no such insurance product that would cover the lost revenue for a studio,” Kingman explained. “Certainly not a standard product. I wouldn’t want to leave the impression there is much insurance for this kind of thing.”

The studio may lose money on The Interview, but it can still leverage massive public interest in the movie to foil the hackers’ wishes that it not be seen. All Sony has to do is simply refuse to take an active role in removing pirated copies of the film when they inevitably pop up online.

People upload full movies to streaming sites like YouTube where they can be viewed for free all the time. There’s an active Reddit community called r/fulllengthfilms dedicated to pointing people to the best ones.

The Digital Millennium Copyright Act (DMCA) has a safe harbor provision for sites like YouTube, which give users the ability to uploaded pirated, copyright-protected content. The sites’ operators aren’t liable for the hosting the stolen content if they respond to requests from a work’s legal copyright holders and take down the material when its pointed out to them.

Over the past day or so, videos with titles like “The Interview Full Movie” have been popping up on YouTube at a frenetic clip. Most of them seem to be the work of scammers looking to direct people to sketchy third-party sites, but others appear to have been taken down by YouTube. 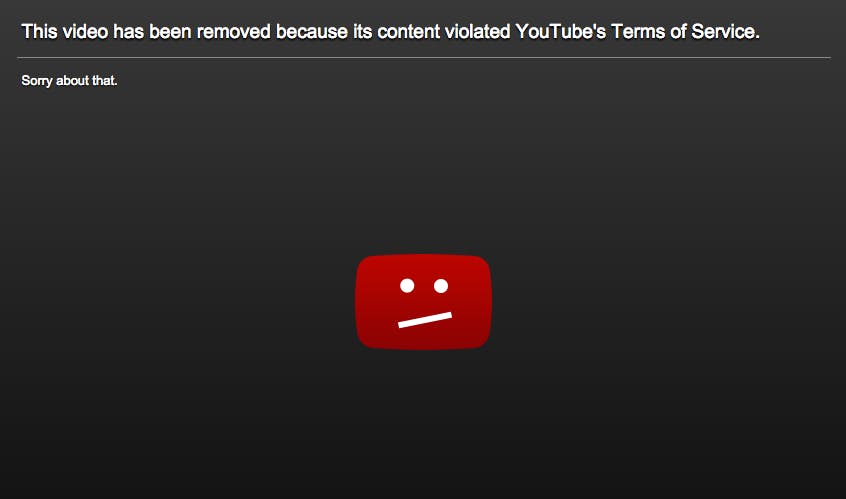 These takedowns may or may not a result of copyright claims filed by Sony, but it’s hard to know for sure. Neither Google, YouTube’s parent company, nor Sony immediately responded to a request for comment. ChillingEffects.org, a website that tracks DMCA takedown requests, has an approximately 10-day lag, so it may be a week or so before its possible to know for sure if Sony is making YouTube take down the movie.

Yet, if Sony wants to get revenge on the people who attacked it, the company probably shouldn’t do anything of the sort. In 1993, tech pioneer John Gilmore told Time that, “[The Internet] interprets censorship as damage and routes around it.”

It’s a line that’s even more true today than when Gilmore first uttered it.

The Interview is inevitably going to to leak online and, when that happens, every news site that covered the whole hacking fiasco is likely going to point all of their readers to where they can see it for free. There will be a flurry of Twitter messages and Facebook status updates pointing to where people can watch the movie for free right that very second. Standard big-budget Hollywood flicks—like The Interview was originally intended to be—get posted to easily accessible sites like YouTube, but they’re quickly spotted by movie studios and taken down, which drives people looking for free access to Bittorrent networks or sketchy sites that don’t inspire a lot of trust.

When Sony’s lawyers spot The Interview on YouTube or Vimeo, there’s nothing stopping them from just ignoring it. The company already seems to have resigned itself to not recouping its investment on the movie.

One scene from the film, where the North Korean leader is met with a gruesome death, is already spreading like wildfire online.

Although, the version hosted on YouTube was quickly pulled. If the Sony executives want to get back at the hackers who have throw their professional lives into chaos, all they have to do is let the movie stand wherever it’s posted and the Internet will do the rest.

Even if Sony does attempt to play whack-a-mole with The Interview, once the film is out there, there’s little anyone can do it stop if from spreading. Maybe finding the movie will require more work than buying a movie ticket or queueing up Netflix, but the throbbing mass of Internet users has shown pretty conclusively that it wants to see first-hand what all the fuss is about. And the throbbing mass of Internet users very often gets what it wants.

At the end of the day, maybe it’s the duty of everyone who cares about free speech to make the extra effort to seek out The Interview. It may not necessarily be a good movie, but it’s likely single best way to stop the hackers from getting what they want.

Photos via DaveB/Flickr (CC BY 2.0) and The Interview | Remix by Fernando Alfonso III