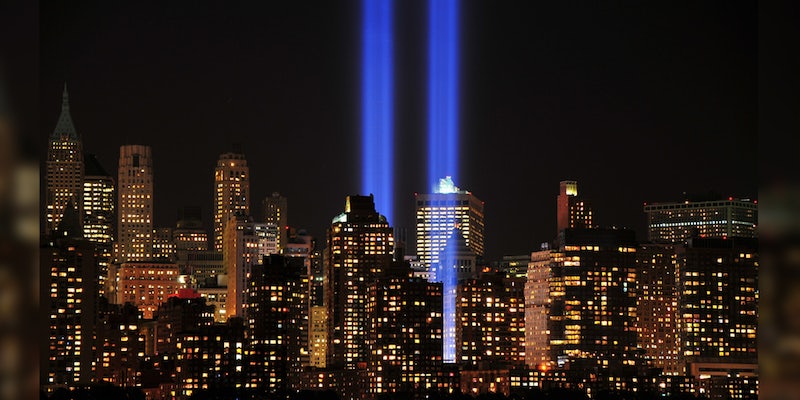 Social media users pay their respects to the victims of 9/11, promise to #NeverForget

Social media users memorialized and paid tribute to the victims of 9/11, on the 15th anniversary of the terrorist attacks.

Sunday marks the 15th anniversary of the terrorist attacks of September 11th, 2001. The occasion has brought out a torrent of tributes, memorials, and remembrances.

It’s since been determined that 2996 people died in the attacks, and thousands more were injured, to say nothing of the often fatal health problems that have afflicted many first responders who helped sift through the rubble and toxic dust at Ground Zero. It was a day that looms large in American history—the single deadliest day in the United States since the Civil War—and the state of U.S. politics and foreign policy had never been the same.

Needless to say, many people on social media have been paying tribute to the victims of the attacks, as well as those first responders who bravely risked and, in some cases, sacrificed their lives in service. Whether using the hashtag #NeverForget, or simply tweeting about their personal memories and reflections on the fateful day, there are plenty of examples that call the attacks and the tragic loss of life to mind.

15 yrs ago our nation was shaken. Today we honor those who we lost & risked their lives for our safety. #NeverForget pic.twitter.com/os5qORyBk2

RIP the all the lives lost on this day and those who risked their lives to save others. #NeverForget 9/11 ❤️ pic.twitter.com/6FFf9omQdm

I will #neverforget this day 15 years ago. Reflecting on the absence but also remembering the strength and courage. pic.twitter.com/x4Gm6EyhYq

Remembering those we lost on 9/11. My prayers go out to all the families going through this hard time. #NeverForget pic.twitter.com/WTOGrlhpLu

I still remember sitting in my 1st grade classroom in shock and horror. Feels like yesterday. #NeverForget15years

#911 lesson: live life today. So, making sauce and meatballs for fam and friends. watching #jets – tho I could just sit and stare all day.

#NeverForget to send love to those who lost loved ones on this day of remembrance. #911 – the day our nation became stronger. #USA

The common thread, if there is one, is the banality of it all—that on a morning like any other and with thoughts of anti-American terrorism hardly on anyone’s mind, one of the most horrifying moments in U.S. history transpired.

As you know, I was driving past Pentagon when plane hit. 911 line jammed, so I called you at WH to report it. https://t.co/IMyIM4i4FF

I was in 4th grade when 911 happened. One of the saddest and most memorable days of my little childhood.

91% of adults remember exactly where they were the moment they heard news about the #911 attacks
via @pewresearch pic.twitter.com/RFwEYOnKaw

I was in NYC doing "The Women" on Broadway. The cast took water & food to firefighters all day. #NeverForget https://t.co/6CEnJ10Mx6

I was a Court TV anchor 9/11/01. Will #NeverForget the grief in watching the towers fall, and the brave responders who ran toward the horror

I was in 7th grade math when they fell..Confusion, fear and prayer turned into strength and unity. We honor the heroes &may we #neverforget.

I was running the mile in school, I was 11. My heart is w/ all those affected, even in the smallest way #NeverForget pic.twitter.com/4j5LU5UEPn

I was 11 when the planes went down, but the feeling I had in the museum was just as raw as 15 yrs ago. #NeverForget pic.twitter.com/JkxIpLt5pl

The city of New York will no doubt be remembering and mourning the attacks throughout the day, as will many people all across the United States. President Obama also offered some moving remarks on Sunday morning. Never to be forgotten, one of the four hijacked planes that day crashed into the Pentagon, while another was brought down by its heroic passengers in Shanksville, Pennsylvania, thwarting an attempt to fly it to the White House.