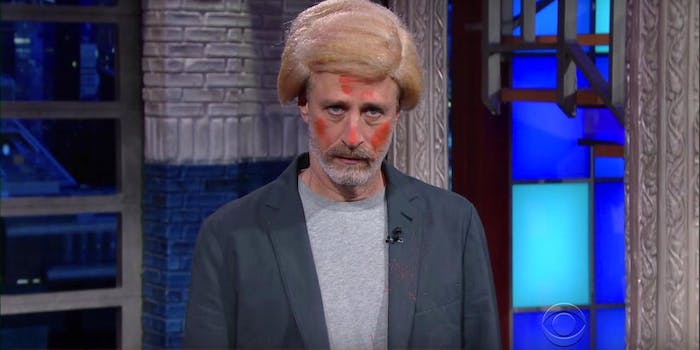 After a successful turn at his old stomping grounds at The Daily Show, Jon Stewart went to visit his old friend Stephen Colbert on The Late Show to discuss permanently renewing the Zadroga Act for the first responders of the Sept. 11, 2001 terrorist attacks.

But because he was now going on broadcast TV, he had to pay the iron price in order to do it.

Over his three months at The Late Show, Colbert has stumbled upon the same thing that many other late-night show hosts have discovered: the media won’t pay attention to the important thing you’re trying to say unless you’re Donald Trump. And while getting Trump himself wasn’t happening, Colbert had a viable alternative.

Even if it killed Stewart—who donned a Trump-inspired wig and cheese-doodle residue on his face—to have to stoop to Trump’s level just to talk about how important it was to renew healthcare measures for the 9/11 first responders, it was worth it. But we suspect that, as he went full Trump, he might have secretly missed the whole routine after being out of the game for four months of Trump stories.