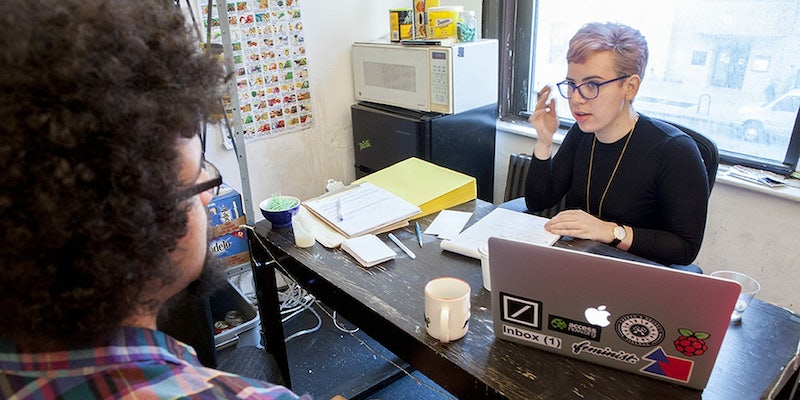 This ‘Social Media Breakup Coordinator’ will handle your digital split

This woman will help you get over a breakup.

Breaking up is hard to do. It can be extra hard when your digital life is intertwined with someone you want to cut ties with. It’s such a struggle that Facebook announced its own feature that lets you hide your ex after a breakup, and at least one startup is providing services that actually break up with your significant other on your behalf.

It’s not just romantic relationships that can be complex to navigate if you want to cut someone out of your life, or share less of your personal information with people. Anyone from a coworker, friend, family member, or harasser can impact the way you spend your time online, and it can be hard to figure out how to deal with it.

To help people manage their social lives online after a breakup, Caroline Sinders created the “Social Media Break Up Coordinator,” a speculative new job and art project that simulates the set up of machine learning and algorithms to help you get that special someone out of your social media sphere.

Sinders is a freelance photographer with experience in computer learning, and has taken on the role of breakup coordinator after extensive research into online relationships and harassment.

It’s not just romantic relationships that can be complex to navigate if you want to cut someone out of your life.

“I’ve been doing so much work in social media around interpersonal relationship grouping,” Sinders said in an interview with the Daily Dot. “I’ve got a pretty clear understanding as to where the algorithms have holes and fall apart. One thing I noticed is that once you start to get to know someone and that relationship sours … it’s still really hard to mute someone that you know that is being mean to you or won’t talk to you, or broke up with you, or you hurt them. That doesn’t feel good for most people.”

“It’s a manual labor you have to do, and when you’re in a high-stress or highly emotional place, it’s another frustrating thing—it’s a mechanism that adds to the frustration of living.”

Sinders provides actionable suggestions and solutions to both eradicate someone from your digital life and clean up your own profiles. For example, she will unfriend an ex for you; delete photos from your phone or social media profiles; erase someone’s contact information from your phone, but keep it for you just in case you want it back; create emails to send to over-sharing coworkers; and unfollow or unfriend accounts associated not just with the person you want to forget, but their connections, too.

Before she gives a client feedback, she has them take a 21-point quiz with questions about who they are trying to remove and what they want their social platforms to look like. Based on the responses, clients will get automated answers, or any number of the 20 minor solutions and outputs preprogrammed by Sinders. She also provides more granular, personalized feedback on top of the algorithmically-generated responses.

Sinders hosted her first “office hours,” this weekend at Babycastles, an independent art gallery and collective in New York City. People took the quiz before sitting down for 15-minute sessions, receiving feedback on how to improve their digital social lives. Sinders also offers more comprehensive services for those willing to pay more to fix up their social networks. I couldn’t make it to Babycastles, so I opted for a phone session.

I tried to be as honest as I could and though I didn’t have an ex I wanted to get rid of or an annoying coworker to avoid, I did want to see if Sinders had any suggestions on how I could potentially make my social media life less personal, to keep more of my social encounters offline.

Sinders suggested I try making my Twitter account more professional, create a Facebook page instead of a personal profile, and remove some social apps from my phone so I don’t become distracted by constant news feeds. She also said I should download a Chrome extension called Forest, an application and plugin that helps you stay productive by placing a seedling on your screen and making it grow into a tree or die based on whether or not you visit sites that distract you the most.

“You can outsource any handling of your life to someone else.”

Sinders created the quiz and the social media solutions based on harassment research and her own breakup. When she went through her breakup, she wrote down all the ways she wanted to modify her own social media, and how she would remove the person from her digital life. But she also looked at the ways alleged members of GamerGate communicated with their victims, and the tools the victims used to avoid or defend against harassment.

Additionally, Sinders conferred with experts including crisis counselors, lawyers, developers, and therapists to figure out the best ways to both help people through emotional and digital issues, and determine her own role in the project.

“I thought that I would initially get really hyper-personal, almost like a therapy session. After talking with a bunch of different people, I realized that was not the right interaction,” Sinders said. “A lot of the feedback I got was: ‘You’re not in the position where you’re meeting someone for the first time to advise them on hyper-specific suggestions for them.'”

By providing broader solutions, Sinders said, she gives clients more agency without thinking she knows more, or is better equipped to handle their emotional state. Participants at Sinders’s weekend office hours paid $10 for a consult, and showed up needing all kinds of advice, from romantic needs to work breakups to advice on how to handle Twitter harassment. Clients had to sign a legal document delineating the project, and Sinders gave each client her notes and wrote up “prescriptions,” on index cards.

Despite the backlash the Breakup Shop startup received when it announced its $30 service that will break up with your significant other on your behalf, Sinders said that she views it as just an extreme version of the so-called sharing economy, with Ubers and Task Rabbits and Postmates to do tasks we’d rather not do ourselves. And her Social Media Break Up Coordinator project is poking a bit of fun at that concept.

“You can outsource any handling of your life to someone else,” she said. “My project is trying to satirize that.”

It might be a satirical art project, but Sinders is also providing a very real service. For many people, paying to have someone to cleanse their social media after a breakup or job loss is worth avoiding the emotional pain it can cause.