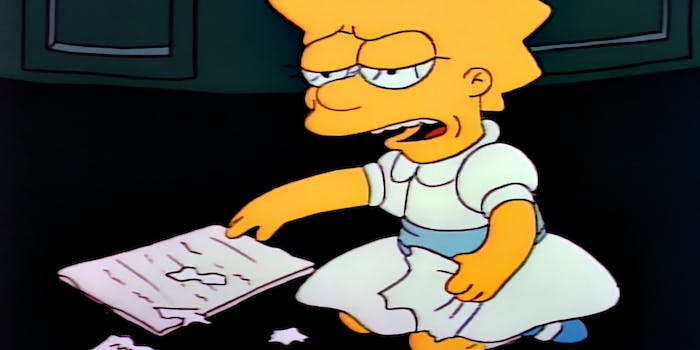 He appears to have misunderstood the GIF's meaning.

Secretary of State Mike Pompeo torched himself on Wednesday night after tweeting a GIF of The Simpsons character Lisa Simpson crying and tearing up pieces of paper, during the Democratic National Convention. It was posted during a segment featuring domestic violence survivors.

The portion was meant to confer former Vice President Joe Biden’s leadership in helping to pass the Violence Against Women’s Act. Pompeo appears to have misunderstood the GIF.

As historian Kevin Kruse (@KevinMKruse) tweeted: “This is the scene in which Lisa learns that an incumbent political official is a crude and corrupt criminal, which shatters her sense of idealism and shakes her faith in America.”

The oft-used GIF comes from a scene in the season 3, episode 2, “Mr. Lisa Goes to Washington,” where young Lisa sees corruption up close for the first time and becomes disillusioned with American-styled democracy.

In the episode, Lisa travels to Washington, D.C., for a pro-America essay contest. She visits a memorial for a fictional women’s rights activist. She finds her local representative accepting a bribe from a lobbyist in exchange for logging permits for Springfield National Forest. In despair, Lisa rips up her essay.

As predicted, many people on Twitter were shocked and appalled by Pompeo’s tweet. @sarah_in_ny wrote: “During a domestic violence spot… wow.”

Todd Zwillich of Vice News (@toddzwillich) wrote: “The Secretary of State’s message to women at the Democratic convention appears to be “cry more.””

This isn’t the first time Pompeo has used this exact GIF. He first used it in February in response to Speaker Nancy Pelosi (D-Calif.) and her visceral agitations as she tore apart up a copy of President Donald Trump’s State of the Union speech.

In a now-deleted tweet, former Simpsons writer Bill Oakley told Pompeo: “Mr. Secretary of State please do not ever ever ever use Simpsons material in your twitter or watch the show or refer to it in any way.”