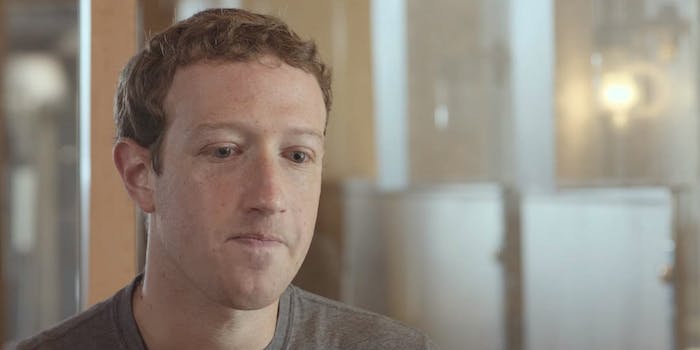 'It puts our children's future at risk.'

Donald Trump’s decision to withdraw the United States from the Paris Agreement was met with widespread disapproval from Silicon Valley elites Thursday.

Among the first to denounce the decision was Mark Zuckerberg, who expressed his disapproval in a Facebook post Thursday.

“Withdrawing from the Paris climate agreement is bad for the environment, bad for the economy, and it puts our children’s future at risk,” Zuckerberg said.

Withdrawing from the Paris climate agreement is bad for the environment, bad for the economy, and it puts our children's…

The Facebook CEO is a member of the Breakthrough Energy Coalition, a group of more than 20 billionaires who have agreed to invest in new technologies to find cleaner and cheaper energy sources.

His sentiments following Trump’s announcement were echoed by several other tech giants, including Elon Musk, who made good on his word to leave Trump’s advisory councils. Robert Iger, CEO of the Walt Disney Company, also announced his resignation from Trump’s councils on Twitter yesterday.

As a matter of principle, I've resigned from the President's Council over the #ParisAgreement withdrawal.

Disappointed with today’s decision. Google will keep working hard for a cleaner, more prosperous future for all.

Decision to withdraw from the #ParisAgreeement was wrong for our planet. Apple is committed to fight climate change and we will never waver.

This is an incredibly shortsighted move backwards by the federal government. We're all on this planet together and we need to work together. https://t.co/tLEdtG0n1o

The U.S. joined Nicaragua and Syria yesterday as the only countries to not accept the climate change agreement. President Trump said he would consider rejoining the Paris accord if the United States can renegotiate a better deal.