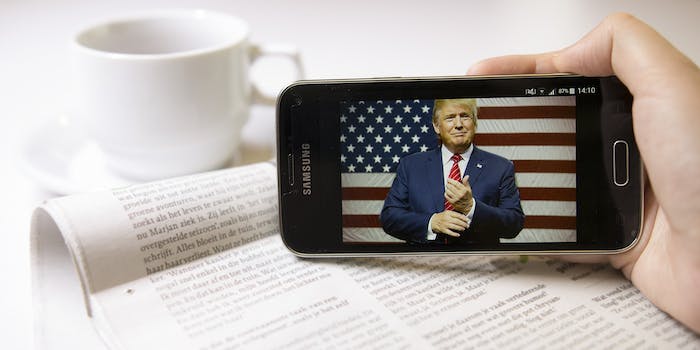 Engineers at major tech companies are refusing to help—unlike their employers.

With Inauguration Day just over a month away, a coalition of employees from major technology companies have started a “Never Again” pledge, publicly stating their refusal to cooperate with any effort from the incoming Trump administration to build a database of Muslims in the United States.

“We are choosing to stand in solidarity with Muslim Americans, immigrants, and all people whose lives and livelihoods are threatened by the incoming administration’s proposed data collection policies,” reads the group’s statement, which is signed by employees of tech companies including Google, IBM, Twitter, Slack, and Indiegogo. “We refuse to build a database of people based on their Constitutionally-protected religious beliefs. We refuse to facilitate mass deportations of people the government believes to be undesirable.”

The pledge comes as tech companies face increasing pressure to answer questions about how they will protect their users from government abuses under Trump, who has said he “would certainly implement” a database to identify, register, and track Muslims and has said he would undertake mass-deportations of immigrants in the United States.

The statement emphasizes the power held by software engineers tasked with building and controlling widely-used technology platforms, many of which collect troves of intimate data about virtually every aspect of peoples’ daily lives and endeavor to predict their behavior based on their activities and preferences. It also notes that technology companies have historically collaborated with autocratic regimes to commit atrocities, specifically calling out how IBM collaborated with the Nazis during World War II:

“We have educated ourselves on the history of threats like these, and on the roles that technology and technologists played in carrying them out. We see how IBM collaborated to digitize and streamline the Holocaust, contributing to the deaths of six million Jews and millions of others. We recall the internment of Japanese Americans during the Second World War. We recognize that mass deportations precipitated the very atrocity the word genocide was created to describe: the murder of 1.5 million Armenians in Turkey. We acknowledge that genocides are not merely a relic of the distant past—among others, Tutsi Rwandans and Bosnian Muslims have been victims in our lifetimes,” it reads.

The signees also specifically promise to advocate within their respective companies to limit the potential for abuse, including a pledge to minimize the collection, retention, and storage of data that would facilitate targeting based on ethnic, religious, or national origin affiliations. They also pledge to “implement security and privacy best practices, in particular, for end-to-end encryption to be the default wherever possible.” If their employers force them to engage in misuse of data, or if there are no legal options remaining, the workers promise to “resign from our positions rather than comply” with unethical government orders. So far the pledge has been signed by just under 150 tech workers, and the page encourages others to add their names using their accounts on the collaborative coding site Github.

The tech workers’ pledge comes in contrast with their own employers, many of whom have either remained silent or actively sought dialogue with Trump since the election. When The Intercept asked 9 tech companies whether they would comply if the government compelled them to help build a registry for Muslims, only Twitter explicitly replied that it wouldn’t. On Wednesday, Trump will meet in private with the CEOs of major tech companies including Apple, Facebook, Amazon, Microsoft and IBM.