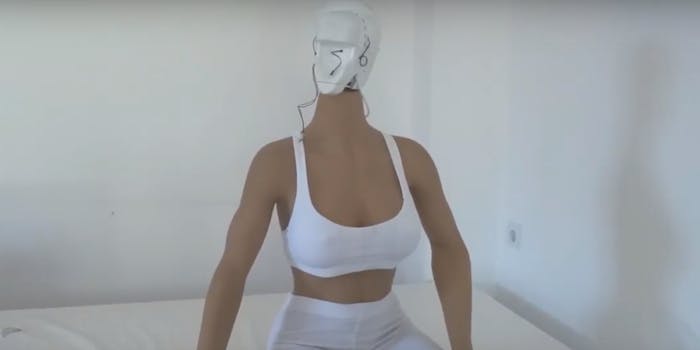 The act wouldn't hold up in divorce court.

You’ve just found out your spouse has been cheating on you and want to file for divorce. There’s just one problem: Their lover is a sex robot.

It appears you can’t legally cheat on your partner with a sex robot, according to Neil Brown, managing director and solicitor at British law firm Decoded Legal.

“Having sex with a robot does not constitute adultery,” Brown told the Sun. “Adultery is only conducted between a respondent and a person of the opposite sex.”

Ignoring for a moment the whole “person of the opposite sex” aspect of the law, this means hopping into bed with a hyperrealistic love machine isn’t one of the five acts that show a marriage has “irretrievably broken down,” and therefore isn’t grounds for divorce in the United Kingdom. Things are more complicated in the United States, with each state having its own set of divorce laws, but it doesn’t appear robot sex would constitute “fault ground.”

Sex robots are a contentious topic, particularly in the U.K., where their appearance on national TV has sparked heated public discourse. A study published in August showed that 40 percent of Britons don’t see having sex with a robot as cheating, but a third say they’d be “horrified” to a find out a friend was in a relationship with one.

These debates aren’t hypothetical; sex robots are “real” and are already being delivered to people’s doorsteps. After a controversial appearance on daytime talk show This Morning, the orgasming sex robot “Samantha” went on sale in the U.K. for £3,500.

Some researchers believe the machines could be good for a relationship and can even help people cope with loneliness. Others, like those in the Campaign Against Sex Robots, believe their proliferation could lead men to treat women as objects. There are also concerns that sex robots could facilitate simulated rape fantasies.

Interestingly, behavioral psychologist Jo Hemmings told the Sun earlier this year that having sex with a robot should be considered infidelity.