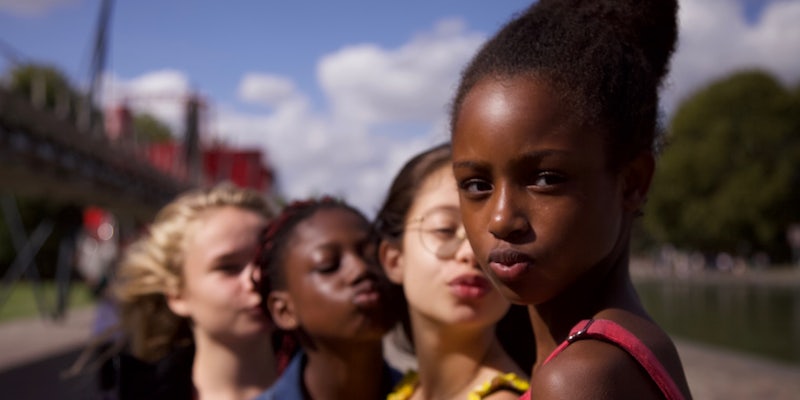 The film is about a young Senegalese refugee who joins a hip-hop dance troupe in Paris.

Cuties is a coming-of-age comedy/drama by French-Senegalese filmmaker Maïmouna Doucouré. Earning positive reviews at film festivals this year, it’s about an 11-year-old Senegalese girl who rebels against her conservative Muslim upbringing by joining a hip-hop dance troupe. It involves a conscious critique of how underage girls are sexualized by Western pop culture, but Netflix is coming under fire for playing into this exact problem.

When marketing Cuties to English-language audiences, Netflix released a very different poster to the original French-language version, titled Mignonnes. The French poster shows a group of pre-teen girls laughing during a shopping trip, while the English version shows them in sexualized dance poses, wearing skimpy outfits and makeup. People quickly picked up on this on social media, disgusted by the way Netflix was choosing to promote the film.

More than 28,000 people have signed a Change.org petition to have Cuties removed from Netflix, accusing the streaming service of marketing it to pedophiles. The film’s IMDb page is already full of one-star reviews labeling it as “revolting” and “literal grooming.” But Cuties doesn’t actually come out until September, so most of these reactions are purely based on the poster and plot summary. Some people who saw the film at festivals (or know more about its background) are arguing that Netflix’s advertising campaign is the problem, misrepresenting the actual tone of the film.

Director Maïmouna Doucouné drew from her own experience as a French-Senegalese refugee when writing and directing the film, exploring the culture clash between her Senegalese Muslim community and the tween rebellion of her French peers. Reviews suggest that it’s a relatively realistic and sensitive portrayal of what it’s like to be a pre-teen girl, presented with radical extremes of how women “should” behave. The trailer introduces it as a standard coming-of-age story, albeit one that plays into the problematic trope of a Muslim girl finding “freedom” by removing her hijab.

Given the very real concerns about sexualizing children—and the recent surge in conspiracy theories about sex trafficking and pedophile rings—it’s no wonder that people reacted strongly to Netflix’s poster. And by marketing Cuties the way it did, Netflix has likely destroyed any chance of this film getting a nuanced reception from mainstream audiences.

There’s a more complicated conversation to be had here about whether it’s okay to put child actors in this position in the first place. Pushing boundaries and trying to “act mature” is a familiar part of growing up, and therefore a recurring theme in coming-of-age dramas. Cuties will be relatable to a lot of girls and women who faced this kind of identity crisis growing up, receiving mixed messages about how to behave. The film seems to offer a critical view of how girls are encouraged to sexualize themselves, kind of like how Little Miss Sunshine poked fun at a child’s inappropriate dancing at a beauty pageant. But in order to tell this story, the actors in Cuties did have to dance around in skimpy outfits. This inevitably puts them at risk of being sexualized by creepy adults, no matter what the director’s original intentions were. For instance, Natalie Portman and Jodie Foster both attracted unwanted attention due to their fame as child stars in mature films. And on top of all this, the child actors of Cuties are now at the center of a noisy controversy about how their own bodies were used to market a movie. A controversy that might not have happened if Netflix had advertised Cuties in a more sensitive way.