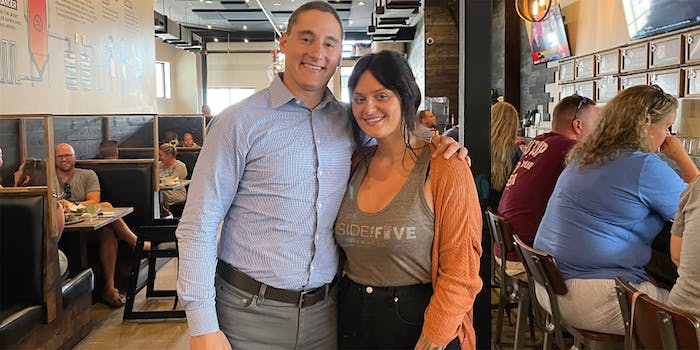 The restaurant featured in the tweet has since shut down their social media pages and received a number of negative reviews.

A conservative Senate candidate in Ohio managed to get a restaurant worker suspended and the restaurant review-bombed following a tweet meant to be supportive of someone sick coming to work—albeit maskless and indoors.

The tweet came on Friday from Josh Mandel, whose campaign website declares him to be “pro-God, pro-gun, and pro-Trump.” Posing with a restaurant worker Inside the Five, a brewpub in Perrysburg, Ohio, he wrote, “Inside The Five is a cool brewery started by two NFL vets. Great food and spirited waitresses! Even though Brianne was sick today, she came to work because she knew they were short servers. These are the type of American workers that make our country strong.”

The photo of the maskless sick worker was met with a good amount of social media backlash from people who felt the tweet was tone-deaf, given the state of the COVID-19 pandemic and hospitals being overwhelmed with mostly unvaccinated patients.

One representative response tweet said, “You’re literally boasting about forcing a sick worker to work. That’s extremely abusive and unsanitary, an act of violence against your workers, your customers, and the larger community.”

Another Twitter user offered some context, noting, “I don’t know if you know this, but we’re living through a pandemic at the moment.”

Another attempted some time machine humor, noting, “We were short in the kitchen, but we could always rely on ol’ Typhoid Mary to show up on time!” – you in 1909.”

As the Toledo Blade reported, “The Tweet ignited a firestorm of criticism on Mr. Mandel’s Twitter feed, with respondents noting the public health hazard that sick food-service employees pose, particularly with the coronavirus pandemic’s resurgence. At least one called on the Wood County Health Department to investigate.”

WTOL-TV reached out to the brewpub for comment. A representative responded, “This is so disappointing. Last week we sent a message to our staff saying that they should report any symptoms, big or small, to a manager, and not come to work. And no one should just assume it’s allergies or a cold. Although our server’s intentions were good, it was not the right decision and it will be addressed. Yes, we are short-staffed, but would close our doors before we put anyone at risk. The employee has since been sent home.”

The spokesperson went on to tell the station, “They say the employee has been told she needs to take a COVID test before she is able to come back to work.”

The brewpub, which appears to have deleted both its Twitter and Facebook accounts in the wake of the controversy, did comment on Mandel’s tweet before going dark. As the Blade reported, the brewpub issued a Facebook post that read, “Contrary to social media opinions expressed yesterday, the health and wellness of our employees and patrons is our top priority. It is our policy for employees to inform management of any symptoms prior to their shift and not report to work. We follow all state and county guidelines. Through all of this, we will continue to care for our staff and provide a safe environment for our customers.”

However, later on Friday, as the heat began to rise, Mandel doubled down on the tweet. “Hey @InsideTheFive,” he chided, “instead of giving into the woke mob, how bout having your employee’s back and giving her a raise.

“While so many people are getting paid to sit home and do nothing,” he continued, “Brianne muscled through feeling under the weather and came to WORK.”

As reporter Tyler Buchanan assessed, “In the aftermath of Mandel tweeting this,

Mandel, aiming for the seat being vacated by Sen. Rob Portman (R-Ohio), isn’t a stranger to controversy. In May, the Columbus Dispatch reported that there’s been an exodus of fundraisers from his campaign; that story also noted, Mandel has promised to ‘never take a knee in the culture wars,’ declaring Rep. Anthony Gonzalez (R-Ohio) a traitor after Gonzalez voted to impeach Trump, attacking Gov. Mike DeWine and his former health director Dr. Amy Acton, and even going after famed children’s author Dr. Seuss in March “after the author’s estate opted to stop printing some of his works that used racial and ethnic stereotypes, which triggered a short-lived controversy among conservatives irate over cancel culture.”

The Dispatch also reported in June that two of the three fundraisers who quit Mandel’s campaign did so due to “a toxic work environment” blamed on Rachel Wilson, the campaign finance director—who is also reportedly dating Mandel.

“Wilson cussed out her subordinates, often demanded 12-hour workdays, berated them in front of others and called them names,” the report said.

The Daily Dot has reached out to Inside the Five and the Mandel campaign for comment.