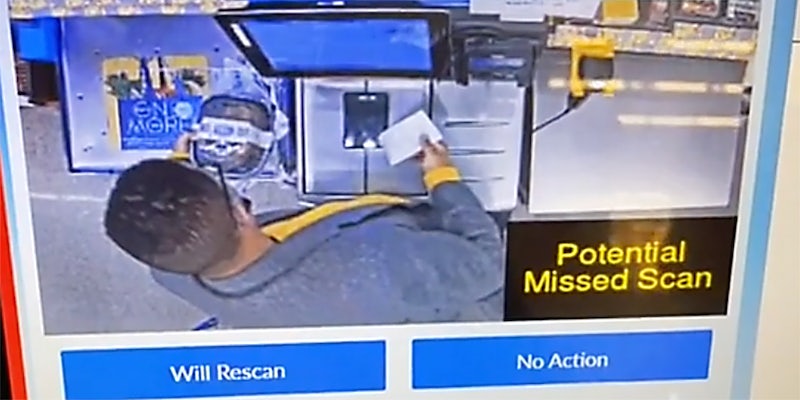 ‘You can clearly see I scanned it’: TikToker says Walmart’s new self-checkout technology accused him of stealing

'Walmart spending all this money but still won't pay their employees a decent wage.'

RéJean Allen (@rejeanlevell) filmed and posted a video on Nov. 1, showing him recording his self-checkout transaction at a Walmart. It features a video being replayed for him showing what the screen labels a “mis-scanned item process.”

“Walmart self-checkout thinking I’m stealing when I’m not,” Allen says. “You can clearly see I scanned it, the chicken, but the machine thinks I stole it.”

“It says potential missed scan, aka potential theft,” he continues. “But I didn’t steal it, so the man had to put his code in.”

Allen previously made a video about Walmart’s new surveillance tech—complete with additional cameras taking high-quality videos of customers’ action in checkout lanes—that went viral. In the video, which was reported on by the Daily Dot, Allen raises concerns about the new tech. In this new video, Allen implies the scanner automatically suggests possible theft if it doesn’t receive the barcode.

Allen previously told the Daily Dot that “the technology… ‘catches’ people who aren’t even stealing. It pauses the entire transaction and then plays a video of you on the screen in slow motion until the employee comes and proves you didn’t steal anything.”

His newer video has been viewed over 1.3 million times since being posted on Nov. 1.

One commenter said, “Walmart spending all this money but still won’t pay their employees a decent wage.”

Another commenter claimed that the same thing happened to her. “They tried to pull this with eggs I scanned. Hundreds of dollars of groceries, and they think I tried to steal some eggs,” she wrote.

Another commenter, citing the same issue, joked, “This happens literally every time I get a seasoning packet. Paying for $100 worth of food, but they think I’m going to risk it all for 40 cents.”

The Daily Dot reached out to Allen and Walmart for comment.