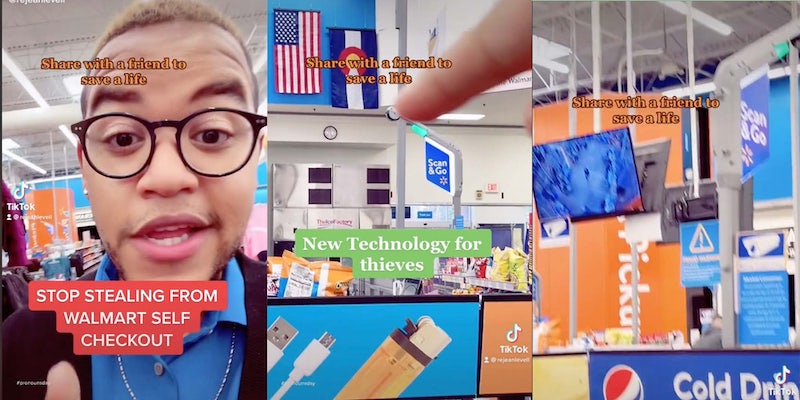 'The slightest hand movement that looks like you're stealing, that camera catches it.'

In a TikTok posted on Oct. 21, Réjean Allen (@rejeanlevell) shows alleged new surveillance technology in the store. The new cameras are above the self-checkout lanes and allegedly feature videos of those it thinks are trying to steal while in self-checkout lanes.

“The slightest hand movement that looks like you’re stealing, that camera catches it and it puts in on the screen,” Allen alleges in the TikTok. “And then it will replay your video back of when you’re trying to steal something if you didn’t scan it.”

Allen’s video comes on the tails of other viral TikToks that show how Walmart prevents stealing in its stores. A video from @thewalmartguy69 shows technology from Zebra that tracks items going in and out of Walmart stores.

In Allen’s TikTok, he advises viewers to “stop stealing from Walmart self checkout.”

TikTok users roasted the technology in the video’s comments section.

“Does it catch Walmart management stealing employees labor by making them work for free on their breaks?” @shut.up.julian wrote.

“I just stole from there yesterday,” another user, @taylalaurens, said. “So I don’t think my Walmart got hip yet.”

“Imagine being a multi million dollar company with nothing else to do except jail the poor,” @mosiemo wrote.

The Daily Dot has reached out to Walmart.

Update 4:35 pm CT Oct. 23: Allen told the Daily Dot in an Instagram direct message that he’s not affiliated in any way with Walmart, but that he shops there frequently.

“The technology actually catches you when your hands do something that they’re not supposed to do. It actually “catches” people who aren’t even stealing,” he told the Daily Dot. “It pauses the entire transaction and then plays a video of you on the screen in slow motion until the employee comes and proves you didn’t steal anything.”