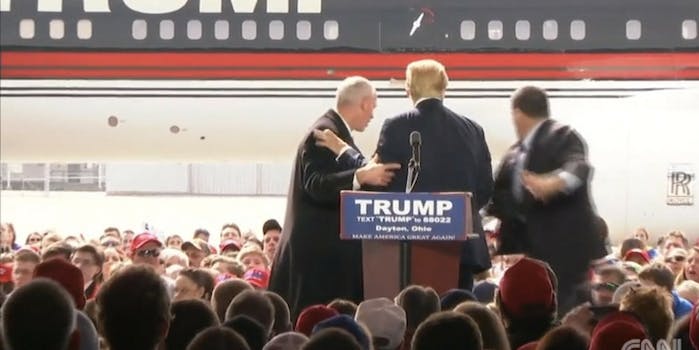 Donald Trump rallies are becoming more hostile as the divisive mogul comes closer to clinching the nomination. At a rally in Dayton, Ohio, Trump’s Secret Service detail unexpectedly jumped onstage as he gave his stump speech.

It appears as if protesters were attempting to take the stage, though they have yet to be identified.

The incident comes on the heels of a giant anti-Trump protest in Chicago that led to the cancellation of his rally there Friday night. Reports had circulated that a Cincinnati rally scheduled for Saturday would also be canceled, but Trump denied as much in multiple tweets.

The rally in Cincinnati is ON. Media put out false reports that it was cancelled! #MakeAmericaGreatAgain #Trump2016

The rally in Cincinnati is ON. Media put out false reports that it was cancelled. Will be great – love you Ohio!

Elsewhere on his timeline, Trump made no mention of the Secret Service springing into action when tweeting about the Dayton rally.