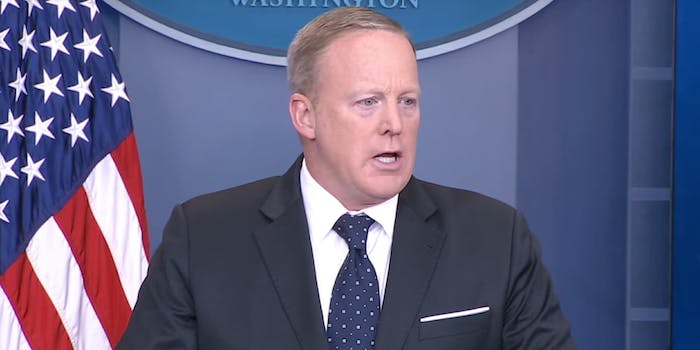 He apparently forgot his former boss had no experience.

Former White House Press Secretary Sean Spicer said on Monday that Oprah Winfrey, whose name has been thrown around as a possible 2020 contender against President Donald Trump, couldn’t win because she is politically inexperienced.

Spicer, speaking on Good Morning Britain, said Winfrey didn’t have the “political infrastructure” to win the presidency, evidently forgetting that his former boss, Trump, had no political experience when he announced his candidacy.

The internet has been a blaze with speculation about a Winfrey candidacy after her speech she gave at the Golden Globes while accepting the Cecil B. DeMille Award.

“She doesn’t have the political infrastructure,” he said. “And we’ve seen this before in our history—where people who have tried to pop in who are not in politics and have had a difficult time adjusting.”

The show’s host, former Celebrity Apprentice winner Piers Morgan, quickly pointed out to Spicer the obvious: Trump had no experience before running for president.

In response, Spicer questioned if Trump’s election as an “outsider” was an “anomaly” or the “new norm.”

The former press secretary said a hypothetical matchup between Trump and Winfrey would be close, but ultimately end up with Trump taking the White House again in 2020.

“I think Oprah would give him a run for his money,” he said.

Last week Spicer admitted that he “screwed up” at times during his tenure as press secretary.