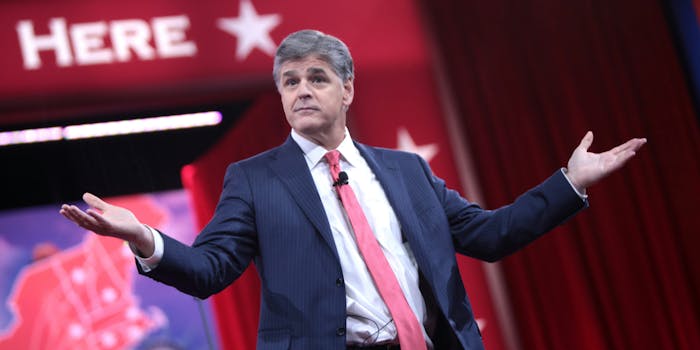 Many homes in Hannity's portfolio were obtained at a discounted price at foreclosure proceedings or with the help of the federal government.

Documents collected by the Guardian reveal that Fox News host Sean Hannity is linked to shell companies which have spent at least $90 million on more than 870 homes in seven states across America, some purchased with the help of the U.S. Department for Housing and Urban Development (HUD).

Hannity appears to be the hidden owner behind at least some of the shell companies that manage properties ranging from luxurious mansions to rentals for low-income families. His attorney did not deny that he owns all of them.

Dozens of his properties were bought at a discount in 2013, after banks foreclosed on their previous owners for defaulting on mortgages, according to the Guardian. These properties include two large apartment complexes in high-poverty, low-income cities in Georgia that Hannity bought in 2014 for $22.7 million. One- and two-bedroom units in Hannity‍‍‍’s apartment complexes are available to rent for $735 to $1,065 per month, which is higher than the average cost of rent in the area.

The purchases in Georgia were funded with mortgages for $17.9 million that Hannity obtained with help from HUD, which insured the loans under a program created as part of the National Housing Act.

The properties also include multimillion-dollar homes used by Hannity and single-family units priced as low as $50,000 in relatively poor suburbs. In at least two cases, multiple homes were bought simultaneously at a discount, after they were repossessed by banks from their previous owners in foreclosure proceedings.

People on Twitter pointed out it’s ironic that Hannity had criticized former President Barack Obama for the U.S. foreclosure rate as he was amassing his real estate portfolio. In January 2016, Hannity said there were “millions more Americans suffering under this president” partly because of foreclosures. In the meantime, he was growing his own business with the help of the federal government.

So @seanhannity bought "dozens" of houses in 2013 after the owners were unable to pay their mortgages due to financial difficulties.

Yet Hannity got #HUD loans to do so, but the folks losing their houses couldn't get the same loans.

This is a pretty terrible scenario. pic.twitter.com/nIboCVTztD

Reports are particularly critical of the fact that Hannity did not disclose his relationship with the Department for Housing and Urban Development when he invited HUD secretary Ben Carson onto his television show on Fox last year. In the interview, he reportedly praised Carson and department.

Spokespeople for HUD and Fox News declined to comment on the record.

Additionally, Hannity has been criticized for defending Michael Cohen—President Trump’s personal lawyer—on air, after court documents revealed that Hannity himself is a client of Cohen. Hannity said in a statement that he never formally worked with Cohen, but only came to him to discuss real estate issues.

“I never retained his services. I never received an invoice. I never paid Michael Cohen for legal fees. I did have occasional brief conversations with Michael Cohen—he’s a great attorney—about legal questions I had, or I was looking for input or perspective. My discussions with Michael Cohen never rose to any level that I needed to tell anyone that I was asking him questions. And to be absolutely clear: They never involved any matter, any—sorry to disappoint so many—matter between me or third parties, or third groups, at all. My questions, exclusively almost, focused on real estate. I said many times on my radio show, I hate the stock market. I prefer real estate. Michael knows real estate.”

The link between Cohen and Hannity was revealed in the wake of the FBI seizing documents from Cohen’s office that were related to Cohen’s payments to adult film actress Stormy Daniels.