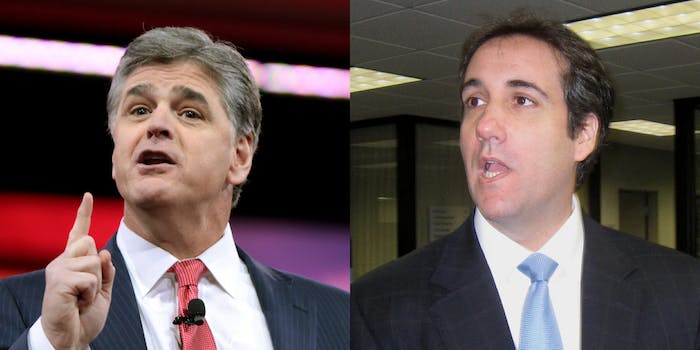 Today, the internet was asunder at the identity of a mystery client represented by Trump lawyer/fixer Michael Cohen.

In the run-up to his court appearance today, Cohen revealed that alongside President Donald Trump and former RNC official Elliott Broidy, he had a third client whose identity he could not disclose. However, a judge ordered Cohen to reveal his mystery client—and it is none other than Sean Hannity.

This is per Cohen's lawyer, who just announced it in court. https://t.co/WoRylWPGxk

Wood: I understand he doesn’t want his name out there but that’s not enough, under the law.
Ryan: the client is Sean Hannity.

Hannity has been one of the president’s leading attack dogs in the conservative media, going hard after government institutions he believes are out to get Trump. Hannity also repeatedly has argued that the president should fire Special Counsel Robert Mueller. The president reportedly speaks to Hannity on the phone regularly as well.

What manner Cohen may have repped Hannity in is unknown, but Cohen’s other two clients both used him to help facilitate payments to women over extramarital affairs they had.

Update 3:20pm CT, April 16: Hannity denied he has ever been represented by Cohen in a statement.