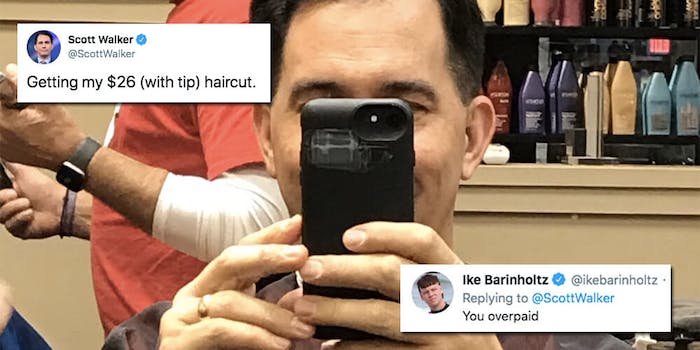 You get what you pay for.

Conservatives will take any opportunity they can get to rag on Rep. Alexandria Ocasio-Cortez (D-N.Y.) for being a normal human being. For example, many expressed outrage upon learning that she spent $300 (plus tip) on a haircut and color. The fact that she paid someone a fairly average amount of money for a necessary service sparked fake outrage amongst her haters, who apparently think her criticisms of the rich mean she should not pay skilled workers for their time and talents.

One critic, in particular, former Wisconsin Governor Scott Walker (R), took aim at Ocasio-Cortez Saturday by posting a selfie of himself in a barbershop, alongside the caption “Getting my $26 (with tip) haircut.”

Walker’s attempt at a dig has thoroughly backfired, with his tweet getting significantly ratioed.

Getting my $26 (with tip) haircut. pic.twitter.com/RqoHNNeC9L

While some are joking that Walker paid too little, others are joking that he actually overpaid. “You barely have any hair! Of course it was cheap,” one wrote. “You got ripped off,” another said.

Others pointed out that Walker is a man, and men’s haircuts are always cheaper than women’s. “Ask your wife how much she spends on her hair to keep up with the standards men expect them to in our society,” Twitter user @MoBill wrote.

I get free haircuts, because I just use clippers at home.

I can't believe you're spending 26 dollars on a haircut.

Now you have to do it, too. Because I tweeted about it.

Some guessed how much of a tip Walker left. “I guarantee the haircut was $25.99 and this guy was like ‘no, man, keep the change,'” Twitter user @whatkyIasaid wrote. Another assumed Walker only left a 2% tip.

See how easy and cheap men have it?

Ask your wife how much she spends on her hair to keep up with the standards men expect them to in our society.

You barely have any hair! Of course it was cheap. Why even bother going to get it cut? You could have done that at home & saved yourself the $26.

Do you get a discount as a result of how much of it is receding?

You got ripped off

Such a deal! Is the Neo-Nazi cut the only one available?

While many were commenting on the haircut itself, others took aim at the financial distress Walker’s time as governor caused Wisconsin. And they did not hold back.

WE paid $2586 for YOUR haircut. What a bargain for you. pic.twitter.com/1FLzhHtlwz

You could buy 184,615,384 of those haircuts with the taxpayer dollars you handed to Foxconn

Walker unintentionally highlighted an important point in favor of Ocasio-Cortez’s $300 ‘do: You get the haircut you pay for.