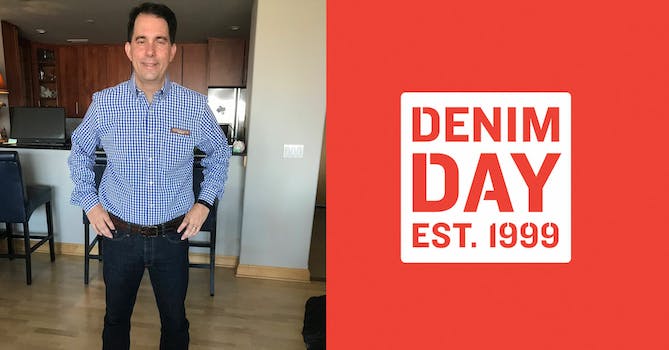 Scott Walker wore jeans for sexual assault awareness, and Twitter is reminding him of his misogynist past

The former Wisconsin governor is no advocate of women's rights.

Denim Day is celebrated annually on a Wednesday in April, which is Sexual Assault Awareness Month. The day itself marks a global day of support for survivors of sexual violence. Those observing it wear jeans to show their support, and some hold fundraisers for organizations that combat sexual assault or support survivors.

While plenty of Twitter users are showing their support for assault victims by wearing demin today, some are cause for a double take. Case in point: a governor with a pretty poor track record of supporting women’s rights.

Walker shared a photo of himself celebrating the day on Wednesday morning:

But then Twitter did what it does best—put him in place.

Wow! Wearing jeans today TOTALLY NEGATES your complete lack of support for assault survivors every other day of the year.

Says the guy who repealed a 2009 state law that let victims of workplace sexual harassment seek punitive damages and compensation for pain and suffering https://t.co/SDkxLSl3xM https://t.co/ZCR35LqdU0

You might have considered passing literally ANY laws or standing up for them while you held elected office. You know, before Wisconsin's teachers kicked you out.

I would feel more supported if he did something useful, like funding the testing of the rape kit back log. But sure, denim. 😎

Some also pointed out his hypocrisy for his support of Supreme Court nominee Brett Kavanaugh, who Walker said was definitely fit for the position. Then in the wake of allegations of sexual assault by Dr. Christine Blasey Ford, he said the Senate needed to “treat it seriously,” but didn’t come out against Kavanaugh.

Yet you support a president who has openly boasted of grabbing women by the pussy. Hypocrite much?

The cynicism about his bare-minimum gesture isn’t unfounded. As various reports show, Walker’s policies shut down reproductive health clinics in his state, making abortion more difficult to access. One Wisconsin Now, a progressive non-profit advocacy group, called him “one of, if not the, worst politician in America for women.” He also made it more difficult for women in his state to access sexual health services, get cancer screenings, and get tested and treated for sexually transmitted infections.

Other policies he supported, such as refusing to raise the minimum wage or supporting drug testing for welfare recipients, also disproportionately affect women, who are more likely to be on food stamps and earn less than men, MSNBC reports.

In addition to his extremely strict views on abortion, which he said should not be allowed even in cases of incest or rape, Walker threatened the budget of the Dane County Rape Crisis Center in his 2017-2019 budget proposal.

Walker also eliminated a 48-hour waiting period for gun purchases, which critics said could make it easier for domestic abusers to get firearms. He continues to support President Donald Trump, who has been accused of sexual assault by multiple women.

The story behind Denim Day traces back to 1992 in southern Italy, where a woman was raped by her driving instructor. After her rapist was convicted, the Supreme Court in 1998 ruled that it could not have been rape as she was wearing jeans, and jeans require some effort and willingness to remove. Their ruling further stated that if a woman really was fighting back, it would be difficult for the man to take her jeans off and rape her.

The backward and callous judgment angered many, inspiring women in the Italian Parliament to wear jeans to work, and sparking off Denim Day, which soon reached an international audience. It was first observed in America by non-profit Peace Over Violence in 1999, and cities throughout the country now observe Denim Day.

It’s shocking to see Walker celebrating a day dedicated to women and victims of sexual violence, given his years of relentlessly working to make it difficult for women to access basic rights.