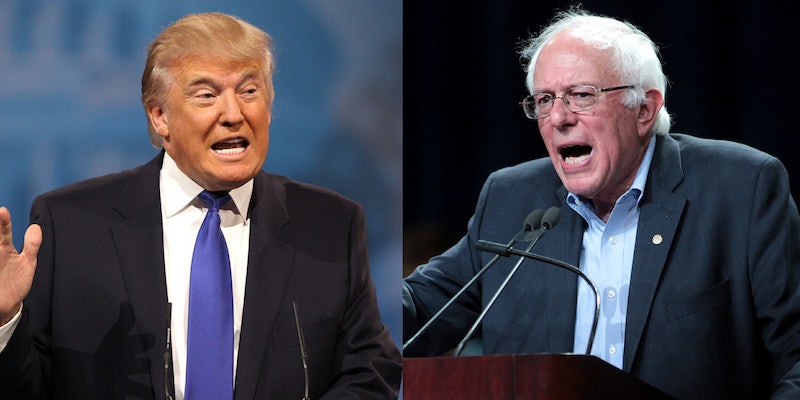 They had a role in determining the election.

A significant portion of people who supported Sen. Bernie Sanders during the 2016 presidential primaries voting for President Donald Trump, according to newly released data.

Ultimately, more than 10 percent of Sanders supporters voted for Trump in the presidential election, according to data released for the Cooperative Congressional Election Study. Nearly 80 percent of Sanders’ voters ended up voting for Hillary Clinton while a small amount voted for a different candidate or didn’t vote at all, according to the data.

Brian Schaffner, a political science professor at the University of Massachusetts, Amherst tweeted out the findings.

Some asked for more detail on how Sanders primary voters behaved in general. This graphic shows this, including small % who abstained 2/n pic.twitter.com/iOjKr7eoYJ

Schaffner dug into why exactly those Sanders supporters cast ballots for Trump rather than Clinton, who would be the more likely choice given the two candidates and their beliefs.

Around 20 percent of the “defectors,” as Schaffner labeled them, were not fans of former President Barack Obama. Race appeared to play a role, with nearly half of the Sanders/Trump voters disagreeing with the notion that “white people have advantages.”

The swing of Sanders supporters to Trump seems to have had a major outcome of the election: without them, the data shows, Clinton might have won the presidency.

The surprise swing of these three states to Trump—who won them with a collective 77,744 votes—is largely credited with handing him the keys to the White House. All else created equal, had the people who voted for Sanders in the primary voted for Clinton in the general election, she would be president instead of Trump.