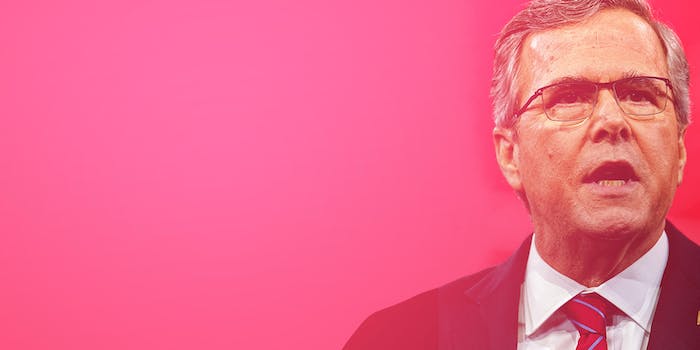 How 2016 presidential candidates responded to the San Bernardino mass shooting

The contrast between the parties is clear.

In the aftermath of a mass shooting at a facility in San Bernardino, California, for people with developmental disabilities on Wednesday that left at least 14 people dead, statements from 2016 presidential candidates started rolling across Twitter.

Democratic candidates expressed sympathy for the deceased and called for renewed efforts on gun control.

Mass shootings are becoming an almost-everyday occurrence in this country. This sickening and senseless gun violence must stop.

I refuse to accept this as normal. We must take action to stop gun violence now. -H https://t.co/SkKglwQycb

Horrifying news out of #SanBernardino. Enough is enough: it's time to stand up to the @NRA and enact meaningful gun safety laws

Republicans echoed the sentiments of their colleagues across the aisle on sympathy, but they stayed silent on gun regulation.

Praying for those impacted by the shooting in California today.

California shooting looks very bad. Good luck to law enforcement and God bless. This is when our police are so appreciated!

Praying for the victims, their families & the San Bernardino first responders in the wake of this tragic shooting.

My thoughts and prayers are with the shooting victims and their families in San Bernardino.

Our prayers are with the victims, their families, and the first responders in San Bernardino who willingly go into harm’s way to save others

My thoughts & prayers go out to those impacted by the shooting in San Bernardino, especially the first responders. -John

Praying for the victims and first responders in #SanBernardino for a quick resolution.

Thoughts & prayers are with #SanBernardino

Praying for all those victimized by the shootings in San Bernardino, California today.

The contrast between Democrats in Republicans highlights a difference in how the two parties respond to high-profile shootings.

After the Planned Parenthood shooting in Colorado Springs, Colorado, last Friday that resulted in the deaths of three people and the injury of seven more, the Democrats were quick to respond with condolences and spirited defenses of Planned Parenthood’s mission of reproductive health.

Republicans, most of whom have expressed strong support for the Second Amendment and oppose abortion, largely stayed silent. Democrats largely support stronger gun control and the right for women to have abortions.

Save a single tweet from Texas Sen. Ted Cruz (R) the following morning, none of the other GOP candidates publicly acknowledged that the shooting had occurred until Sunday. Even Cruz waited nearly a full 24 hours before weighing in.

In contrast, within a couple hours of news breaking about the San Bernardino shooting, nearly the entire Republican field had responded.