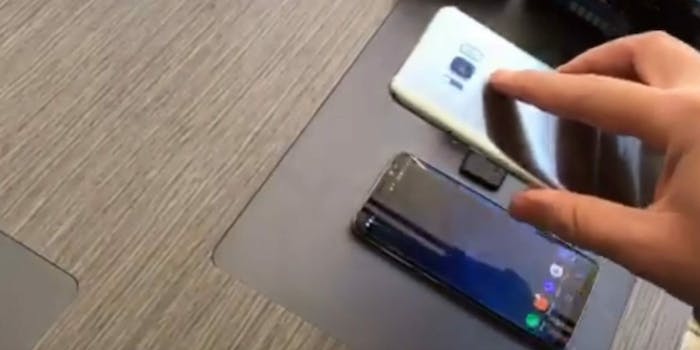 You probably shouldn't use this method anyway.

Samsung showed off a facial recognition feature on the Galaxy S8 that is intended to be a convenient and secure way to unlock your device. But a video released Wednesday shows it may not be as safe as you’d hope.

Twitter user Marcianophone ran a test while streaming to Periscope to see if a selfie of someone’s face would unlock their device. Unfortunately, it worked really well.

Before we give Samsung criticism for what appears to be a trivial oversight, we should mention the phones at the Unpacked event may have been running pre-production software, and there is a chance an update fixes any issues before launch.  A Samsung spokesperson told Mashable that members of the media ran similar experiments before the unveiling but were unable to unlock their devices.

That leads us to believe that the photo needs to have a certain composition to bypass the new security measure. No matter the case, it would be unacceptable for any photo to unlock a phone. Thankfully, the Galaxy S8 has some alternative methods for getting into your phone, like a fingerprint sensor and iris scanner along with your standard on-screen methods.

Samsung claims the facial recognition feature should be used as an alternative option to the fingerprint sensor or iris scanner, according to Mashable. It even acknowledged that it isn’t as secure as using those other methods. If that’s the case, we suggest Samsung advertise the facial recognition function as a secondary method for dual or multi-factor verification, rather than an alternative to more secure practices.

We won’t know for sure how well the Galaxy S8’s facial recognition works until we’ve got our hands on one. We’ll make sure to test for any vulnerabilities in our full review.